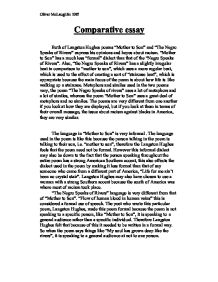 "And places with no carpet on the floor", the staircase effect used in this sentence can be pointed out, and pla-ces with no car-pet on the floor, the sentence jumps quickly from on syllable to the next, just like stairs, this does not always work on any sentence you make, that is why it is such a clever use of words. In the other poem written by Langston Hughes, "The n***o Speaks of Rivers", the beat used throughout the poem is regular. Langston Hughes like before with the formal language, may have decided that because of who the poem is actually talking to, that it required a regular beat, "I've known rivers: ancient, dusky rivers" this is just one example of the regular beat used in the poem "The n***o speaks of Rivers". In the poem "Mother to Son" metaphors (comparison not using like or as) are common but there are very few similes (comparison using like or as). Part of Langston Hughes' message presented in the poem "Mother to Son" was that life is like a staircase, he puts this message across without once saying "like", if he had there would be similes in the poem. ...read more.

The major points that have been reviewed are language used, the rhythm and the amount of metaphors and similes. When it came down to the language used, it turned out that "Mother to Son" used a very informal way of speaking; this was because the mother was talking to her son, the other poem "The n***o Speaks of Rivers" uses formal language, this is because there is a general audience being spoken to rather than a specific person. Next, when it came down to the rhythm used, "Mother to Son" used a irregular beat like walking a staircase, and "The n***o Speaks of rivers" used a regular beat. Metaphors were used a lot in "Mother to Son" and "The n***o Speaks of Rivers" used a similar amount of metaphors and similes. So the poet Langston Hughes, overall message about r****m was a couple of things. Firstly no matter how much you are but down and how miserable you feel, still try and get on with your life without giving up completely. The other message was that blacks have a rich and strong culture and history just as whites do. Oliver McLaughlin 10ff ...read more.