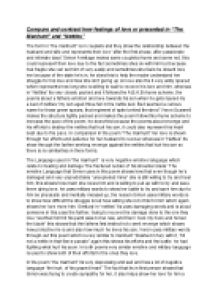 ﻿Compare and contrast how feelings of love or presented in ?The Manhunt? and ?Nettles? The form in ?the manhunt? is in couplets and they show the relationship between the husband and wife and represents their love ?after the first phase, after passionate and intimate days? Simon Armitage makes some couplets rhyme and some not, this could represent their love due to the fact sometimes shes ok with him but because hes fragile she can set him of very easily and sometimes she feels he dosent love her because of the state he?s in, he does this to help the reader understand her struggle for his love and how she isn?t giving up on love also the it very widly spaced which represents how long she is willing to wait to recover his love and him, whereas in ?Nettles? its very closely packed and it follows the A,B,A,B rhyme scheme, the ...read more.

The Language used in ?the manhunt? is very negative emotive language which relate to healing and damage ?the fractured rudder of his shoulder blade? The emotive Language that Simon uses in this poem shows how that even though he?s damaged and very unpredictable ?unexploded mine? she is still willing to try and heal him, this shows how much she loves him and is willing to put up with to try and save there dying love, he uses military words to show her battle to try and save him due to him be physically and mentally messed up, the reason Simon uses military words is to show how difficult the struggle is but how willing she is to this for him which again shows her love more him. Similarly in ?nettles? its uses damaging words and is about someone in this case the farther, trying to recover the damage done to the ...read more.

a lot more due to it being her saying it which makes us believe it a lot more, plus the slow pace of the poem also shows her patience for his love. In the poem ?Nettles? the tone of the poem is very quick and shows passion from the farther to kill the nettles ?stood up right no more. I lit a funeral pyre to burn the fallen dead? Vernon use an A,b,a,b rhyme scheme to help increase the pace of the peom to help show his aggression and to show how quick he does everything to try and kill the nettles which hurt his son, this shows how passionate and how much he loves his son and how he wants to protect him from getting hurt again in the future which also shows how caring he is. Both poems have a similar tones but are also very different in pace. ...read more.