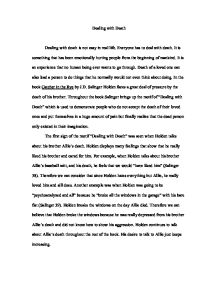 Dealing with Death in Catcher in the Rye

Dealing with Death Dealing with death is not easy in real life. Everyone has to deal with death. It is something that has been emotionally hurting people from the beginning of mankind. It is an experience that no human being ever wants to go through. Death of a loved one can also lead a person to do things that he normally would not even think about doing. In the book Catcher in the Rye by J.D. Salinger Holden faces a great deal of pressure by the death of his brother. Throughout the book Salinger brings up the motif of "Dealing with Death" which is used to demonstrate people who do not accept the death of their loved ones and put themselves in a huge amount of pain but finally realize that the dead person only existed in their imagination. The first sign of the motif "Dealing with Death" was seen when Holden talks about his brother Allie's death. ...read more.

For example, after old Sonny leaves Holden gets very upset and talks "sort of out loud, to Allie" (Salinger 98). Holden also tells us that he talks out loud to Allie when he gets depressed. Therefore, we can say that Holden does not want to let go of Allie out of his life. Hence he stores Memories of Allie safely in his heart. The example above obviously proves that Holden really loved his brother Allie and still does. Another sign is found when Holden talks about the guy who plays the kettle drums in the orchestra. Holden remembers that when he and Allie visited Washington with his dad "Allie sent him a postcard" (Salinger 138). He wants us to know this because; he is trying to prove to us that Allie is very friendly. Holden wants us to feel that way because he wants only good things to happen to Allie's soul. ...read more.

Throughout the novel, Holden Caulfield deals with many of his dead brother Allies memories by putting himself into a lot of trauma. Holden also talks out loud to Allie a couple of times when he got really depressed. Many other people in the real world also face the same problem "Dealing with Death" the Holden had to deal with. Salinger's message to all these people who are facing the same problem is that there are very few happy endings in real life. Therefore stop living in the past and think about the present. You have an excellent future waiting for you. Do not make it go to a waste. As Blaise Pascal once said "The present is never our goal: the past and present are our means: the future alone is our goal. Thus, we never live but we hope to live; and always hoping to be happy, it is inevitable that we will never be so" (Thinkexist.com). ...read more.