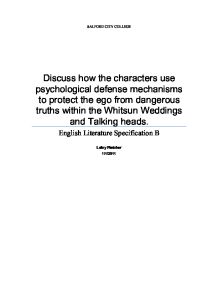 Discuss how the characters use psychological defense mechanisms to protect the ego from dangerous truths within the Whitsun Weddings and Talking heads.

SALFORD CITY COLLEGE Discuss how the characters use psychological defense mechanisms to protect the ego from dangerous truths within the Whitsun Weddings and Talking heads. English Literature Specification B Lainy Fletcher 1/1/2011 Discuss how the characters use psychological defence mechanisms to protect the ego from dangerous truths within the Whitsun Weddings and Talking heads. According to Freudian theory, the ego, Latin for "I", prevents us from acting on our basic biological drives, but also works to achieve a balance with our moral standards created by out social environment. The ego is both conscious and unconscious. Freud established that our ego creates defence mechanisms to cope with conflicts between reality and either society's morals, norms, and taboos. Within the Whitsun weddings, the characters view themselves as isolated through the way they view other people. The speaker gets a sense of who they are through measuring themselves through other people. They will see other people and measure their life from them. As a result of this the characters in Self's the man and Mr Bleaney struggle to accept their loneliness because they have deluded themselves into believing that they are better off alone, and that is the lifestyle they have chosen. When they almost come to terms with this hard truth, they fall back into doubt with "I don't know" and "or I suppose I can". In A Chip In The Sugar , there is still a sense of this however, the characters have an initial idea of who they are, or how they want to appear to others, but they are usually wrong, which is ironic. ...read more.

Lesley is in denial, a defence mechanism which blocks threatening thoughts or information from awareness, thud protecting Lesley, and her ego, from accepting her failure as an actress. "Kenny, this is the kind of evening I like, two people just talking about something interesting... I woke up in the middle of the night and couldn't remember where I was. Then I saw the cat sitting there, watching trout." The monologue jumps from Lesley being in a conversation with a man, and waking up the next morning in their bed. Although Lesley appears to be promiscuous, it is somewhat acceptable and pitiable as it is a result of her naivety and her loneliness. However, her naivety is in question because she appears to recognise their intentions "thank you kind sir but I didn't fall off the Christmas tree yesterday."Perhaps Lesley, although initially sceptical of these men, is later fooled, which reinforces her naivety. It could appear to some extent she realises that the s****l attention is the only attention she will receive from men, therefore she complies. The monologue never describes any s****l encounters of Lesley's which are not related to her role. Perhaps this is an incapability Lesley has to speak about this and she "couldn't remember where I was", suggests the ego has repressed the actual act of intercourse from Lesley's mind, which could highlight Lesley's incapability to accept that she has no more to offer to other people than s*x. ...read more.

"Without them sending a van", refers to married life driving him crazy, although "or I suppose I can" indicates that he in fact the single life he has chosen, will equally drive him crazy, creating irony because he is not "a better hand at knowing what I can stand". Overall the speaker in Self's the Man, struggles to come to terms with the fact that the life he thinks is better suited to him, which is ironic because this life makes him just as unhappy as he thought the life he tried to avoid would make him. Within these works, the key theme is self perception and how that is formed. Larkin's speakers isolation is self inflicted, similarly to that of Bennett's speakers. Lesley, in Her Big Chance has a deluded self importance and finds it difficult to accept her loneliness or how she is undervalued as a person. When Lesley outlines key features of herself, it creates irony and ultimately a greater effect. Through the person speaking to the reader, it highlights that they are the opposite of what they say they are. In A chip in the Sugar this is also evident because he finds it so difficult to accept himself as a h********l it causes severe a mental illness and he denies it even when his mother demonstrates that she knows the truth. Overall, all of the characters within these works struggle to come to terms with who they are, and try and live with the delusion with that are content being who they desire to be, and how they think they want to live. ...read more.