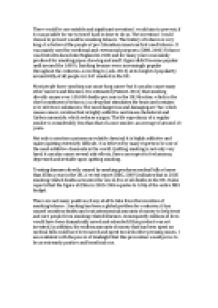 English Writing -The invention I would choose to prevent would be smoking tobacco.

﻿There would be one notable and significant invention I would aim to prevent, if it was possible for me to travel back in time to do so. The invention I would choose to prevent would be smoking tobacco. The history of tobacco is very long; it is believed the people of pre Columbian Americas first used tobacco. It was mainly used for medicinal and ceremonial purposes. (CNN, 2000) Tobacco was first introduced into England in 1565 and for many years was mainly produced for smoking pipes, chewing and snuff. Cigars didn?t become popular until around the 1600?s. Smoking became every increasingly popular throughout the centuries. ...read more.

Nicotine, which is the chief constituent of tobacco, is a drug that stimulates the brain and contains over 400 toxic substances. The most dangerous and damaging are Tar, which causes cancer, nicotine that is highly addictive and raises cholesterol and Carbon monoxide, which reduces oxygen. The life expectancy of a regular smoker is considerably less than that of a non-smoker, an average of around 10 years. Not only is nicotine a poisonous volatile chemical it is highly addictive and makes quitting extremely difficult. It is believed by many experts to be one of the most addictive chemicals in the world. ...read more.

There are not many positives, if any at all to take from the invention of smoking tobacco. Smoking has been a global problem for centuries, it has caused countless deaths and cost astronomical amounts of money to help treat and cure people from smoking related illnesses. Consequently millions of lives would have been dramatically saved and extended if this product was not invented. In addition, the endless amounts of money that has been spent on medical bills could have been saved and spent towards other pressing issues. I am confident with the power of hindsight that this prevention would prove to be an extremely positive and beneficial one. ...read more.