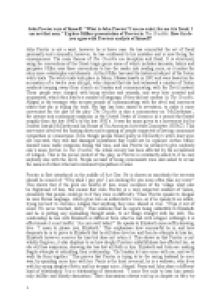 Explore Millers presentation of Proctor in The Crucible. How far do you agree with Proctors analysis of himself?

﻿John Proctor says of himself: "What is John Proctor? I am no saint; for me it is fraud. I am not that man." Explore Millers presentation of Proctor in The Crucible. How far do you agree with Proctors analysis of himself? John Proctor is not a saint, however he is brave man. He has committed the act of fraud personally and criminally, however, he has confessed to his mistakes and is now facing the consequences. The main themes of The Crucible are deception and fraud. It is structured, using the conventions of the Greek tragic genre some of which includes harmatia, hubris and peripatea. Miller uses these conventions to lure the reader into reading more, as it makes the story more catastrophic and dramatic. Arthur Miller has used the historical subject of the Salem witch trials. The witch trials took place in Salem, Massachusetts in 1692 and were based on the accusation of a twelve year old girl, who claimed that she had witnessed a number of Salem residents keeping away from church on Sunday and communicating with the Devil instead. These people were charged with being witches and wizards, and were later arrested and imprisoned, which then lead to a number of hangings, if they did not confess. In The Crucible, Abigail is the teenager who accuses people of communicating with the devil and convinces others that she is telling the truth. ...read more.

But there is another reason why he wants to expose the girls? pretence. Proctor is desperate for the truth to be out in the open, to clear his conscience and once the village knows that no witchcraft took place then all prisoners would be free and so Elizabeth would be able to return to her home where she belonged. When it was time for Proctor to stand up in court, he had some reservations, doubtful as to whether he should confess or whether he should just be hung. ?I mean to deny nothing!" This shows that he is confused, not knowing what to think. Whilst he is being questioned he is also asked if there was anybody else he saw with the Devil - this links to the McCarthy trials. In the McCarthy trials people accused of communicating with the Devil were constantly asked to reveal the names of others who had links to communist opinions. Act 3 is a very dramatic scene as John Proctor accuses Abigail Williams of being a w***e. Here, Miller expects the audience to be stunned but also relieved as they sit back with ease now that they know what is coming, that Proctor is sure to confess soon. From the moment Proctor and Abigail are left alone dramatic irony fills the scene and we know that soon fate will take over revealing their shameful secret. ...read more.

Miller has done this so that it keeps the audience interested, making it obligatory for them to pay close attention as the play draws to an end. The judges and Hale have almost convinced him confess. When he speaks to Elizabeth he is always asking for her opinion about what he should do, but Elizabeth being the loyal wife, does not give him a straight answer making it even more frustrating for the audience. "I am not your judge, I cannot be. Do as you will, do as you will!" This suggests that she doesn?t want to tell him to do the wrong thing, but she is also telling him to follow his heart and do what he thinks is right. But then Proctor decides he cannot bring himself to sign his name on the confession. This unwillingness shows his desire not to dishonour his fellow prisoners. More importantly, it illustrates his obsession with his good name. Reputation was very important in Salem. Earlier in the play, Proctor's desire to protect his good name keeps him from testifying against Abigail. Now, however, he has come to a true understanding of what a good reputation means and what he has to do to keep it? that he should tell the truth, and not lie, to save himself. "I have given you my soul; leave me my name!" he shouts; this defence of his name allows him to gather the courage to die, heroically, with his goodness. ...read more.