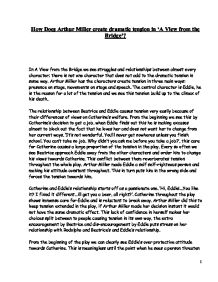 How Does Arthur Miller create dramatic tension in A View from the Bridge(TM)?

How Does Arthur Miller create dramatic tension in 'A View from the Bridge'? In A View from the Bridge we see struggles and relationships between almost every character; there is not one character that does not add to the dramatic tension in some way. Arthur Miller has the characters create tension in three main ways: presence on stage, movements on stage and speech. The central character is Eddie, he is the reason for a lot of the tension and we see this tension build up to the climax of his death. The relationship between Beatrice and Eddie causes tension very easily because of their differences of views on Catherine's welfare. From the beginning we see this by Catherine's decision to get a job. when Eddie finds out this he is making excuses almost to block out the fact that he loves her and does not want her to change from her current ways. 'It's not wonderful. You'll never get nowheres unless you finish school. You can't take no job. Why didn't you ask me before you take a job?', this care for Catherine causes a large proportion of the tension in the play. ...read more.

Although this true his reason for it is to stop him almost luring Catherine away from him. We later see Beatrice's and Eddie's argument over Catherine and her choices, Eddie states his resentment towards Rodolpho clearly and his self righteousness of his views. This argument between them builds tension on their relationship and there's between Catherine and also Catherine's between Rodolpho. He questions where she has gone and what she does when she comes back from an evening with Rodolpho. He is obviously paranoid and over suspicious of Rodolpho's and her actions. Rodolpho obviously tries his best to be on Eddie's best side but as is revealed later this would be impossible because of Eddie's love for Catherine. We see the spurious companionship between Eddie and the Group in the end of act one, at one point Rodolpho corrects him about a fact and acts like he knows the answers, building tension in the atmosphere and the characters. Eddie's tension is made clear through the whole of the play and especially in this scene, the rocking chair is where his tension can be heard the noise of the chair would get louder and faster the tenser Eddie gets. ...read more.