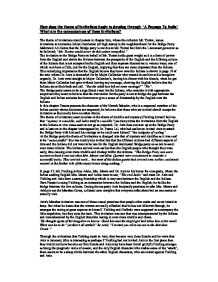 How does the theme of invitations begin to develop through A Passage To India(TM) What are the consequences of these invitations?

How does the theme of invitations begin to develop through 'A Passage To India' What are the consequences of these invitations? The theme of invitations mainly starts in chapter four, where the collector Mr. Turton, issues invitations to numerous Indian Gentlemen (of high status) in the neighbourhood for the Bridge Party. Mahmoud Ali claims that the Bridge party is not due to Mr. Turton but from the Lieutenant governor as he believed; "Mr. Turton would never do this unless compelled." The invitation to the Bridge Party on behalf of Mr. Turton holds great weight as it is a form of power from the English and shows the division between the prosperity of the English and the differing culture of the Indians that is not accepted by the English and they separate themselves in various ways, one of which is to have a Club, just for the English, implying that they are more important than the Indians. This underlying importance that the English believe they have over the Indians is shown in page 10 of the text, where Dr. ...read more.

as many times the invitations from the English to the Indians or vice versa seem to not go as expected. Dr. Aziz does not turn up to the Bridge Party and is later on in the chapter interrogated by Dr. Panna Lal, who had earlier on invited Aziz to attend the Bridge Party with him and his carriage so he could save himself "the indignity of cycling". At the Bridge party the theme of Invitations is changed into that of mystery and muddles as it was said to be "unsuccessful" this was mainly due to that fact that the different cultures had different aspects of time and the Indians did not want to be late for the English dominated Bridge party so as not to seem even more inferior. The Indians arrived even earlier than the English people who thought they were early, thus causing even more muddle and mishap within the cultures. "The Bridge Party was not a success-at least it was not what Mrs. Moore and Miss. Quested were accustomed to consider a successful party. ...read more.

'He thought again of his bungalow in horror. Good heavens the stupid girl had taken him at his word! What was he to do "yes that's all settled!" he cried, "I invited you all to see me in the Marabar Caves."' Through the invitations that Fielding made to Aziz, they became very close friends and he vows that Aziz is innocent, (this is interesting as perhaps if Fielding had not invited Aziz in the first place then they would not have become so firm friends and Aziz may have been found guilty?) Fielding emerges as being the pragmatic voice of reason, and the only English character who makes sense of the 'attack', there seems to be a sharp divide between the other English characters, who are united against Fielding and Aziz. Invitations led to the increase in muddle and obscurity of India and their culture, they also led to disastrous occurrences but also to their cure. Invitations brought Fielding and Dr. Aziz together as close friends even though there was a culture divide between them and this friendship helped to solve the muddle and mishap that the other invitation, that of the Marabar caves visit made. ...read more.