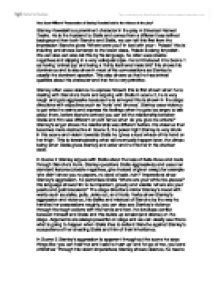 How does Williams Presentation of Stanley Kowalski add to the violence in the play?

Stanley Kowalski is a prominent character in the play A Streetcar Named Desire. He is the husband to Stella and comes from a different less refined background than both Blanche and Stella, we can tell this first from the impression Blanche gives 'Where were you? In bed with your - Polack!' this is insulting and shows contempt to the lower class, Polack is slang for polish. We can also can also tell this by his language, he often uses double negatives and clipping in a very colloquial style. He is introduced into Scene 1 as having 'animal joy' and being a 'richly feathered male bird' this shows his dominance and is also show in most of his conversations as Stanley is usually the dominant speaker. ...read more.

This is foreshadowing what will eventually happen later, the climax being when Stella gives Stanley and order and he hits her in his drunken state. In Scene 2 Stanley argues with Stella about the loss of Belle Reve and roots through Blanche's trunk, Stanley questions Stella aggressively and uses non standard features (double negatives, give instead of given away) for example 'she didn't show you no papers, no deed of sale..huh?' Imperatives show Stanley's aggression, he patronises Stella 'Where are your white fox-pieces?' His language shows him to be impatient, greedy and volatile 'where are your pearls and gold bracelets?' The stage directions mirror Stanley's mood with words such as stalks, pulls, Jerks out, and Hurls. Verbs show Stanley's aggression and violence, his dislike and mistrust of Blanche by the way he handles her possessions roughly, you can also see Stanley's violence through his rough actions with his hands and feet. ...read more.