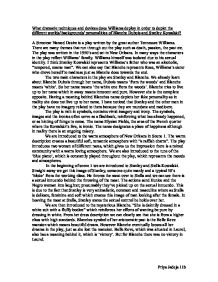 What dramatic techniques and devices does Williams deploy in order to depict the different worlds/ backgrounds/ personalities of Blanche Dubois and Stanley Kowalski?

What dramatic techniques and devices does Williams deploy in order to depict the different worlds/ backgrounds/ personalities of Blanche Dubois and Stanley Kowalski? A Streetcar Named Desire is a play written by the great author Tennessee Williams. There are many themes that run through out the play such as death, passion, the past etc. The play was written in the 1950's and set in New Orleans. In many ways the characters in the play reflect Williams' family. Williams himself was isolated due to his s****l identity. I think Stanley Kowalski represents Williams's father who was an alcoholic, "tempered, coarse man". We can also say that Blanche represents Rose, Williams's sister who drove herself to madness just as Blanche does towards the end. The two main characters in the play are Stanley and Blanche. We already learn about Blanche Dubois through her name, Dubois means 'from the woods' and Blanche means 'white'. So her name means 'the white one from the woods'. Blanche tries to live up to her name which in away means innocent and pure. However she is the complete opposite. Having a meaning behind Blanches name depicts her fake personality as in reality she does not live up to her name. I have noticed that Stanley and the other men in the play have no imagery related to them because they are mundane and mediocre. The play is rich in symbols, contains vivid imagery and irony. The symbols, images and the ironies often serve as a flashback, reinforcing what has already happened, or as hinting of things to come. The name Elysian Fields, the area of the French quarter where the Kowalski's live, is ironic. The name designates a place of happiness although in reality there is an ongoing misery. We are introduced to the warm atmosphere of New Orleans in Scene 1. The warm description creates a beautiful soft, romantic atmosphere with "a raffish charm". ...read more.

In Scene 4 Blanche confronts Stella about her outrageous husband and his animal like habits. She says "He acts like an animal, has animals habits". We see how Blanche has picked on all his habits and cannot stand him. She finds his way of living repulsive and unacceptable. In a result of this she wants Stella to leave him. Scene 5 is quite a major scene as we learn more about Blanches past. The Scene begins when Blanche talks about Star signs. I think there is a significance in the star signs as Stanley does not like to be associated with a goat when she says he is a Capricorn. We learn that Blanche is a "Virgo for virgin" although we the audience know she is no virgin. Stanley finally confronts her with the information he has learnt about her. Blanche feels threatened by Stanley because she knows that he has found out about Hotel Flamingo and her past in Laurel. Again this shows that Blanche cannot forget or let go of her past, "Hotel Flamingo is not the sort of establishment I would dare to be seen" Blanche finally admits to Stanley's accusations and explains that she did what she did for protection, and how she needed security. This reveals that Blanche is neither pure nor innocent. I think she went to Hotel Flamingo to prove to herself that she still had looks no matter what age she is. Blanche is constantly longing for some kind of security so now wants to marry Mitch. She relies on the help and kindness of strangers. Blanche explains her attraction to younger men, "I must keep my hands off children" as she flirts with the young man in this scene. In scene 6, Blanche tells Mitch that being in love with her husband, Allen Grey was like having the world revealed in bright, vivid light. Since Allen's suicide, Blanche says the bright light has been missing, "never for one moment since has there been any light that's stronger". ...read more.

I can refer back to the first poker game where Stanley was loosing which triggered off his violent side. However in this poker game Stanley seems to be winning. The difference in the two poker games indicates the threat that Blanche presents to his marriage. Under Blanches influence, Stella tends to argue with Stanley during the first poker game; his authority is questioned as the women don't abide his rules. Although in this poker game, Stanley is winning and he is in control of the poker and Blanche. Stanley has finally taken revenge, and now he is seeing her sent away forever. Eventually in the chapter, "the cathedral chimes are heard" which could be indicating that her death is near mentally. They could also remind her of Allen's death. The doctor is called to take her away as everyone does believe she has driven herself to insanity. When the doctor finally arrives, Blanche is reluctant to leaving and becomes aggressive. Although she is finally convinced that she must leave. She says how she "always depended on the kindness of strangers". I have also realised there seems to be a theme of colour that runs through the play. All the men in the play are loud boisterous and vulgar, they all wear dark colours. Stanley's bowling jacket is indicated to be a bright colour like green or red. In contrast the women, especially Blanche tend to wear pastel shades and natural colours such as white. At one point in the play Blanche spills some coke on her dress. This can be related to her past. The coke on her dress could represent her past. She is trying to wipe it off which is just like her trying to wipe away her past. I think in this William is trying to say many things. The first being that relationships were based on s*x in the 1950's, and the second would be that in society men had more rights and power than women. He uses various techniques throughout the play to show the different worlds and background. Priya Jadeja 11b ...read more.