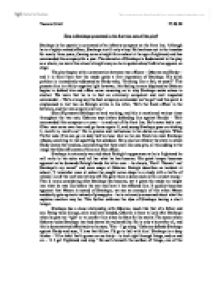 How is Stanhope Represented in the First Two Acts of 'Journey's End'?

How is Stanhope presented in the first two acts of the play? Stanhope is the captain in command of an infantry company on the front line. Although he is a highly ranked officer, Stanhope is still only a boy. He has been out in the trenches for nearly three years, (having come straight form school at he age of eighteen) and has commanded his company for a year. The character of Stanhope is fundamental to the play as a whole; we learn this almost straight away as he is spoken about before he appears on stage. The play begins with a conversation between two officers - Osborne and Hardy - and it is from them that the reader gains a first impression of Stanhope. His drink problem is immediately addressed as Hardy asks, 'Drinking like a fish, as usual?' This presents him in a fairly negative light however; this feeling is soon displaced as Osborne begins to defend him and offers some reasoning as to why Stanhope seeks solace in alcohol. ...read more.

He is also horrified at the state in which Hardy leaves the trenches, commenting that they smell like cess pits; all this adding to the image that Sherriff creates of him as a fine officer. Stanhope is extremely worried about Raleigh's appearance as he is frightened he will write to his sister and tell her what he has become. His quick temper becomes apparent as he demands Raleigh hands his letter over - he shouts, 'Don't 'Dennis' me! Stanhope's my name!' and even snaps at Osborne. Raleigh describes an incident at school, 'I remember once at school he caught some chaps in a study with a bottle of whisky. Lord! the roof nearly blew off. He gave them a dozen each with a cricket stump.' This is ironic considering what Stanhope has become, yet it gives the reader an insight into what he was like before the war and how it has affected him. ...read more.

He see's beneath the surface of things, one of the qualities that make him a fantastic captain. This is demonstrated when Hibbert complains he is suffering from neuralgia; he see's through his pretence and describes him as 'Another little worm trying to wriggle home.' He believes it is wrong to feign illness - 'It's a slimy thing to go home if you're not really ill, isn't it?' Despite his disliking for Hibbert, after his initial threat to shoot him he is understanding and comforting, even offering to accompany him on patrol. He has a real sense of decency, evident throughout the two acts. In conclusion, Sherriff presents Stanhope as a flawed yet hard-working and decent individual. Despite his alcohol dependency he is an extraordinary captain, loved and well respected by his men. The reader learns all this through Stanhope's actions, stage directions, what the other characters tell us about him and their responses to him. Sherriff presents him as a tragic hero, troubled and hardened by his experiences. ?? ?? ?? ?? Yasmin Gillett 27.09.08 ...read more.