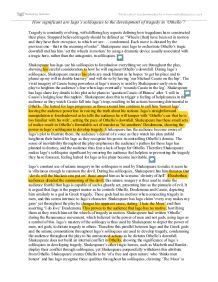 How significant are Iagos soliloquies to the development of tragedy in Othello?

How significant are Iago's soliloquies to the development of tragedy in 'Othello'? Tragedy is constantly evolving, with differing key aspects defining how tragedians have constructed their plays. Stoppard believed tragedy should be defined as: "Wheels [that] have been set in motion and they have their own pace, to which we are . . . condemned. Each move is dictated by the previous one - that is the meaning of order". Shakespeare uses Iago to orchestrate Othello's tragic downfall and has him 'set the wheels in motion' by using a dramatic device usually associated with a tragic hero, rather than the antagonist, in soliloquies. Shakespeare has Iago use his soliloquies to foreshadow everything we see throughout the play, showing his careful consideration to how he will engineer Othello's downfall. During Iago's soliloquies, Shakespeare ensures his plots are made blatant as he hopes 'to get his place and to plume up my will in double knavery' and will do so by having 'our Michael Cassio on the hip'. The vivid imagery of Cassio being powerless at Iago's mercy is used by Shakespeare early on in the play to heighten the audience's fear when Iago eventually 'wounds Cassio in the leg'. Shakespeare has Iago share key details to his plot as he plans to 'question Cassio of Bianca' after 'I will in Cassio's lodging lose this napkin'. ...read more.

Shakespeare's other tragic heroes, such as Macbeth and Hamlet, display their conflict through soliloquies, yet Shakespeare purposefully withdraws this attribute from Othello. Shakespeare creates Othello to be 'of a free and open nature' who 'thinks men honest' and has Iago recognise these qualities throughout his soliloquies, claiming 'The Moor' is 'of a constant, loving, noble nature'. By doing this, the audience realise that Othello has no internal conflict and Shakespeare makes it clear that Iago has recognised this also. Renaissance tragedy depended on the protagonist's internal conflict to result in miscalculation or revenge, as the gods no longer devised tragedy in men. Therefore, Shakespeare ensures Iago's main purpose is to create Othello's internal conflict. This is highlighted at the end of the play when Iago is captured, only saying 'from this time forth I never will speak word' when Othello asks 'why he hath ensnared my soul and body'. This silence is used by Shakespeare to create catharsis; whilst Iago previously guided the audience through his plans, they are now left emotionally purged as Iago has no explanation to why he has set the wheels of tragedy in motion. Shakespeare clearly displays Othello's development of internal conflict by creating his first soliloquy late on in the play, having him question whether Desdemona is 'a closet lock and key of villainous secrets'. ...read more.

Therefore, Shakespeare uses Iago's soliloquies to develop tragedy to show he has condemned Othello to his tragic downfall, corrupting his mind with poison enough to ensure such 'foul disproportion' could not stop the inevitable. In conclusion, it is clear that Iago's soliloquies are key in developing Othello's tragic downfall. Shakespeare ensures that Iago sets tragedy 'in motion' throughout his soliloquies, not simply foreseeing it, to show the power such simple language and manipulation can have over a seemingly 'fair warrior'. Shakespeare has chosen to create Iago as a satanic character to frighten the audience, using his mastery of language to direct and persuade those around him to do evil, showing how men now have the power of gods to evoke tragedy. This would have scared contemporary audiences whilst they face their lack of power to stop Iago's manipulation of Othello, let alone stop his power over themselves. Shakespeare induces the fear of encountering people with god-like powers who will plant poison into their own minds, leaving their fate similar to Othello. Without Iago's soliloquies, there would be no tragedy of Othello, yet throughout the play it is clear that Iago sets the wheels of tragedy in motion, dictating the plot of tragedy. ...read more.

This essay starts well with a thoughtful consideration of some of the effects of the soliloquies. It contains some interesting ideas and makes several, mainly successful, attempts to include relevant contextual information. It is too repetitive in places, partly because it loses the focus on the soliloquies and partly because it needs a tighter structure to ensure relevance. In an essay that asks for consideration of particular parts of a text, it is best to consider structural significance (why do the soliloquies occur when they do?) and offer some close analysis of the passages in questions. This enables cross referencing with the wider play to be considered as well.

This essay engages with the question superbly. There is a sustained focus on tragedy throughout, and the debate is carefully crafted. When talking about tragedy, it is clear that you focus on one definition as it allows for a cogent ...

This essay engages with the question superbly. There is a sustained focus on tragedy throughout, and the debate is carefully crafted. When talking about tragedy, it is clear that you focus on one definition as it allows for a cogent argument. This essay does this incredibly well, using Stoppard's definition to ensure the points within the play fit. I liked how there was a strong awareness of audience response, as this shows a understanding of the significance of the play as its medium. Iago's soliloquies are analysed and picked apart by this essay, allowing for the significance to be evaluated.

The analysis in this essay is strong. At no point does this essay retell the plot, meaning that every point contributes to the argument through analysis. Such techniques ensure you are not wasting words by narrating, but instead replacing it with meaningful discussion which supports the argument. Language is analysed throughout, and the paragraph on satanic imagery is particularly strong. Contextual evidence is used to support the argument, drawing upon Renaissance literature to show the significance of Iago. Being able to weave these interpretations and contextual features in, as this essay has, makes the essay much more convincing. A common problem at any level is a bolt-on context sentence, or paragraph, whereas this essay is able to use context to support an argument. A style I particularly liked in this essay were the phrases such as "Shakespeare uses" as it shows that the play, and the characters within it, are constructs for dramatic effect. This ensures that beyond the analysis of Iago's soliloquies, there is is a discussion of why Shakespeare uses them to create Othello's tragedy. Being able to do this at A-Level will ensure you pick up the highest marks, as it shows how the techniques shape meanings.

The structure here is superb. The introduction is cogent, offering a clear definition of tragedy, and the conclusion weaves the argument together by giving a judgement on the significance. Each paragraph has a clear signpost, which in turn means the paragraphs remain focus and don't repeat points. The use of technical terms throughout is excellent, showing a strong craft and style. Spelling, punctuation and grammar are flawless. This essay is to be admired!