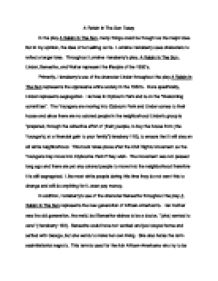 In the play A Raisin In The Sun, many things could be thought as the major idea. But in my opinion, the idea of not selling out is.

A Raisin In The Sun Essay In the play A Raisin In The Sun, many things could be thought as the major idea. But in my opinion, the idea of not selling out is. Lorraine Hansberry uses characters to reflect a larger idea. Throughout Lorraine Hansberry's play, A Raisin In The Sun, Linder, Beneatha, and Walter represent the lifestyle of the 1950's. Primarily, Hansberry's use of the character Linder throughout the play A Raisin In The Sun represents the oppressive white society in the 1950's. More specifically, Linder represents segregation. He lives in Clybourn Park and is on the "Welcoming committee". The Youngers are moving into Clybourn Park and Linder comes to their house and since there are no colored people in the neighborhood Linder's group is "prepared, through the collective effort of ?their? ...read more.

Her mother was the old generation, the maid, but Beneatha wishes to be a doctor, "?she? wanted to care" (Hansberry 133). Beneatha could have not worked and just stayed home and settled with George, but she wants to make her own living. She also hates the term assimilationist negro's. This term is used for the rich African-Americans who try to be white. Next, she does not believe in G-d. Mama does and when Beneatha says she doesn't, Mama gets upset. Beneatha is very different from the older generation because she does not see things as they do, she thinks that no matter what color skin you have or what gender you are, you can still do what you want to. ...read more.

Once Mama gives him the rest of the insurance money he gives it to Bobo for the store. Bobo gives it to Willy Harris and he runs away with it. This leaves Walter in shock and the rest of the family upset. In conclusion, Lorraine Hansberry uses Lindner, Beneatha, and Walter to represent the lifestyle of the 1950's throughout A Raisin In The Sun. Linder represents segregation because he wants to keep Clybourne Park an all white neighborhood. Beneatha represents the new generation because she wants to be a doctor and make a difference. Walter represents the working class African-American during the 1950's, he wants to live a different life but because of his skin color he cannot. These three characters in the play show how bad of a lifestyle people lived in the 1950's. ...read more.