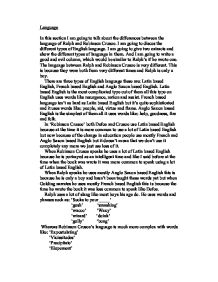 In this section I am going to talk about the differences between the language of Ralph and Robinson Crusoe.

When Ralph speaks he uses mostly Anglo Saxon based English this is because he is only a boy and hasn't been taught these words yet but when Golding narrates he uses mostly French based English this is because the time he wrote the book it was less common to speak like Defoe. Ralph uses a lot of slang like most boys his age do. He uses words and phrases such as: 'Sucks to your_____' 'gosh' 'smashing' 'wacco' 'Waxy' 'wizard' 'doink' 'golly' 'bong' Whereas Robinson Crusoe's language is much more complex with words like: 'Expostulating' 'Vicissitudes' 'Precipitate' 'Elopement' If Ralph were to write a good against evil column it would probably read like this: Good Evil I have crashed on an island luckily I have survived and I have With no grown ups to save me other boys ...read more.

Here is and extract from 'Lord of the Flies' this shows Ralph and the other boys language and Defoe's language too. ' "This is real exploring," Said jack "I bet no-one has been here before." "We ought to draw a map," said Ralph "only we have no paper." "We could make scratches on the bark" said Simon "and rub black stuff in it." Again came the solemn communication of shining eyes in the gloom. "Wacco!" "Wizard!"' In this extract we can see the difference between the boy's language and Golding's. We can see that the boys use much more simpler language then Golding for example Golding uses words like 'solemn' whereas the boys use more simple language such as 'rub', and 'stuff'. ...read more.