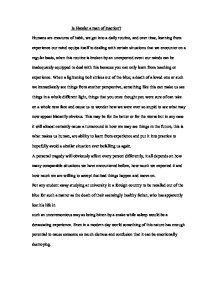 Is Hamlet a man of inaction?

Is Hamlet a man of inaction? Humans are creatures of habit, we get into a daily routine, and over time, learning from experience our mind equips itself to dealing with certain situations that we encounter on a regular basis, when this routine is broken by an unexpected event our minds can be inadequately equipped to deal with this because you can only learn from teaching or experience. When a lightening bolt strikes out of the blue; a death of a loved one or such we immediately see things from another perspective, something like this can make us see things in a whole different light, things that you once thought you were sure of can take on a whole new face and cause us to wonder how we were ever so stupid to see what may now appear blatantly obvious. This may be for the better or for the worse but in any case it will almost certainly cause a turnaround in how we may see things in the future, this is what makes us human, are ability to learn from experience and put it into practice to hopefully avoid a similar situation ever befalling us again. A personal tragedy will obviously affect every person differently, it all depends on how many comparable situations we have encountered before, how much we expected it and how much we are willing to accept that bad things happen and move on. ...read more.

thoughts on women, and love, he thought love was forever, but if this was so how could his own mother do this, he can't understand how, how could the woman who brought him up and clung to his father as if the more she saw him the more she wanted him suddenly do move between to brothers as alike as he to Hercules, Shakespeare has chosen this metaphor, and many other like it throughout the play because he knows, everyone, even the groundlings, would have heard some version of the story of Hercules, know for his immense strength and physical ability, this gives them a an open window with a view straight at what he is trying to get at. Hamlet is in such a confused state at this point that he appears lost, but this is not to be the final blow he still has to meet the ghost. We rejoin hamlet after he has met the ghost, found out about the true circumstances of his fathers death and made certain of the fact that Claudius was the one responsible for his passing, he knows what he has to do, he has to exact his revenge to honor his father. I feel that Even some of the most humble of people would find it hard to control themselves in a situation ...read more.

Hamlet must be aware that something is not right with this, and is advised by his only true friend that he has maintained trust in throughout the whole play to not go through with it and to back out, but Hamlet is not in a sensible state of mind and agrees to the duel. In the duel hamlet is struck with the poisoned rapier and then so is Laertes when they both drop their daggers and they pick up each others, hamlets mother drinks to this- from the poisoned cup. The queen collapses shortly after drinking and it is at this point it is Laertes who announces Claudius as a fiend, not Hamlet, even now he has seen his mother die before his very own eyes, Laertes and hamlet make there peace ,and with Hamlets last breaths he eventually executes his action, he forces Claudius to drink from the poisoned cup, and with this, his deed is done, he has avenged his father, and he now has the weight lifted from his shoulders, but his lack of pragmatic action has left the court a bloodbath, his inability to act without thinking has been his downfall. Maybe if he was to have killed Claudius as soon as he confirmed he was the murderer, then this would have been a different story, but the there would not have been a play to be written for us to enjoy hundreds of years later. ...read more.