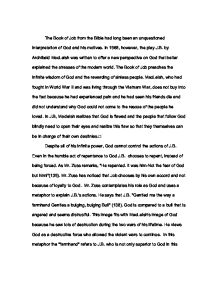 The Book of Job from the Bible had long been an unquestioned interpretation of God and his motives. In 1968, however, the play J.B. by Archibald MacLeish was written to offer a new perspective on God that better explained the stresses of the modern world. The Book of Job preaches the infinite wisdom of God and the rewarding of sinless people. MacLeish, who had fought in World War II and was living through the Vietnam War, does not buy Into the fact because he had experienced pain and he had seen his friends die and did not understand why God could not come to the rescue of the people he loved. In J.B, Macleish realizes that God Is flawed and the people that follow God blindly need to open their eyes and realize this flaw so that they themselves can be In charge of their own destinies.? ...read more.

He views God as a destructive force who allowed the violent wars to continue. In this metaphor the "farmhand" refers to J.B. who is not only superior to God in this metaphor but also is calming God who is always in control in The Book of Job. Contrary to The Book of Job, which always reinforces God's wisdom, J.B. advocates personal perseverance. ? This segment is not about God's greatness but instead J.B.'s moving on with his life. Nickles says that the only victory God had to win was Job overcoming his loss. "The choice is swallowing this swell of world Or vomiting in the trough. Job swallowed it, that's your triumph!" (139). This is a metaphor that says that Job could move on or he could destroy himself in his own pity. ...read more.

This Is making fun of Gods actions because God Is supposed to be the Almighty, the one that brings justice among mortals and here he Is committing unjust actions against a man that had followed him without ever disobeying him. Through out the whole play, Mr. Zuss Is shown as being one of Gods biggest supporters but In Scene 10, he becomes disappointed In God and his actions saying "Is god to be forgiven?(140)". This comes to show that God Is flawed and men have to be responsible for their destiny because If put In the hands of God, their lives might run amok. Macleish shows his purpose effectively through the use of several literary devices. He achieves the main purpose of this segment, which is not to highlight the flaws in God's wisdom but instead to argue the power of the ordinary man. ...read more.