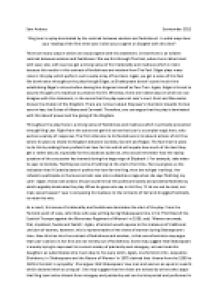 King Lear is a play dominated by the contrast between wisdom and foolishness. In what ways does your reading of the first three acts incline you to agree or disagree with this view?

﻿Sam Ansloos Semtember 2012 ?King Lear is a play dominated by the contrast between wisdom and foolishness?. In what ways does your reading of the first three acts incline you to agree or disagree with this view? There are many ways in which one would agree with this statement, in that there is an evident contrast between wisdom and foolishness. We see this through The Fool, where he is rather blunt with Lear; also, with Lear we get a strong sense of his irrationality and madness which is ironic because this results in this contrast of foolishness and wisdom from The Fool. Edgar plays many roles in this play which perform such a wide array of functions. Again, we get a sense of this fool like dominance throughout the play through Edgar, as Shakespeare doesn?t spend much time establishing Edgar?s virtues before having him disguise himself as Poor Tom. Again, Edgar is forced to assume the garb of a madman to preserve his life. Whereas, there are indeed ways in which we can disagree with this statement, in the sense that the play opens at Lear?s court. Kent and Gloucester discuss the division of the Kingdom. ...read more.

Again, a feminist would oppose to this maleness of traditional criticism of women; however, this is representative of the views of women during Shakespeare?s time. How this ties into the contrast of foolishness and wisdom, is that some feminists may argue that Lear?s actions in Act One are not merely out of foolishness. Some may suggest that Shakespeare is merely trying to represent his current society of patriarchy and misogyny, as Lear treats his daughters as subordinates who must obey to his every whim. Again, one feminist critic, Jacqueline Disinberre, in ?Shakespeare and the Nature of Women? in 1975 claimed that ?drama from the 1590 to 1625 is feminist in sympathy?. She argues that Shakespeare ?saw men and women as equal in a world which declared them as unequal?. One may suggest that her views are echoed by others who argue that King Lear invites dissent from misogyny and patriarchy and can be interpreted and performed in ways that highlight and expose patriarchy as vicious and unjust. Moreover, Shakespeare seems to intend on a serious portrayal of the madness of King Lear which wouldn?t have been something which was used in similar Renaissance dramatists, who would have used this madness for comic effect; Shakespeare, uses this madness in Lear to dominate a sense of foolishness in the play. ...read more.

/All thy other titles thou hast given away; that thou wast born with?. These lines are typical of the Fool?s interaction Lear; his sarcasm is blunt and hard hitting. The Fool seems to be representative of the truth and that seems to support this idea of wisdom. However, Shakespeare challenges the reader and makes it clear that there is a contrast between the idea of wisdom and foolishness because of the fact that one wouldn?t expect a Fool to challenge and be so blunt with a person as powerful as Lear, so one can argue that perhaps the Fool is indeed the foolish one. To conclude, there are indeed ways in which Shakespeare dominates the play with a contrast between the idea of foolishness and wisdom. There is irony throughout because of the fact that the Fool seems to be the truth-teller. Again, because of Lear?s rash actions in Act One he seems to be the foolish one, and as a result, there is a constant contrast between foolishness and wisdom. Marxist critic, Victor Kiernan argues that Shakespeare ?must have started from something personal, some dislocation of his own life?. Consequently, one can argue that the play isn?t dominated by this contrast between foolishness and wisdom, but that it makes the attempt to highlight the society in which Shakespeare was living ? a society of patriarchy and hierarchical dominance. ...read more.