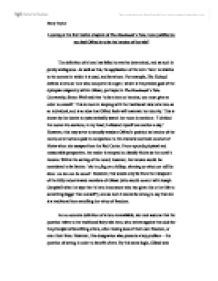 Looking at the first twelve chapters of The Handmaid(TM)s Tale, how qualified do you feel Offred is to be the heroine of the tale?

Looking at the first twelve chapters of The Handmaid's Tale, how qualified do you feel Offred is to be the heroine of the tale? The definition of a hero has failed to ever be determined, and as such is purely ambiguous. As well as this, the application of the term 'hero' is relative to the context in which it is used, and by whom. For example, The Talmud defines a hero as 'one who conquers his urges', which is the precise goal of the dystopian oligarchy within Gilead, portrayed in The Handmaid's Tale. Conversely, Simon Weil said that 'to be a hero or heroine, one must give an order to oneself.' This is more in keeping with the traditional view of a hero as an individual, and is an idea that Offred feels will maintain her identity. This is shown by her desire to systematically search her room in sections: 'I divided the rooms into sections, in my head; I allowed myself one section a day.' However, this may serve to actually weaken Offred's position as heroine of the novel, as her actions pale in comparison to the dramatic and bold conduct of Moira when she escapes from the Red Center. From a purely physical and measurable perspective, the reader is tempted to classify Moira as the novel's heroine. Within the setting of the novel, however, the heroine would be considered to be Janine: 'she's a flag on a hilltop, showing us what can still be done: we too can be saved'. ...read more.

This presents the very real possibility that there is a resistance group operating in Gilead, a solid opportunity for Offred to base her fragile hopes for a happier future on a far more tangible basis than those provided by her own rebellious thoughts. In this respect, she can be considered a hero for doing what Offred is too afraid to do - a seditious action founded on a delicate bond of assumed trust between the two handmaidens. In comparison, the most rebellious of Offred's actions was stealing a wilted flower that she intended to hide for the next handmaiden to live in the room. However, this does show that she lacks a sense of optimism and the expectation of an end to the Gileadean regime, instead wanting nothing more than the very human desire to leave a mark, a sign that she had once existed (once described as 'the desire to carve one's name into a block of ice on a hot summer's day'). However, this apparently small and wholly insignificant action must be viewed in context; as in Gileadean society this action is utterly forbidden and would be punished severely. This shows Offred's dedication to the preservation of her identity, as well as the desire to leave a small (however insignificant in appearance) message to those who follow her, showing that free will existed in a place and time where it was not supposed to. ...read more.

However, within the first twelve chapters the reader is unaware of her various heroic acts whilst incarcerated within the rigmarole of Gileadean society, including her daring escapes. Instead, the question focuses on the ability of Offred to fulfil the role that has been allotted to her, to which the actions of Moira are in complete disparity. With this acknowledged, it is apparent to the reader that within the bounds of the first twelve chapters, Offred is the hero intended by Atwood to demonstrate the strength of the human will in the face of indoctrination that aims to remove one's identity as a person; turning them instead into nothing more than 'ambulatory chalices', whose sole purpose in society is to produce babies. What Atwood is trying to convey through Offred is the ideal of one's mind being the final vestige of hope, and that when thoughts of rebellion are all that you are capable of, they can lead to greater things. This is expressed well by Ayn Rand, who said: 'Do not let your fire go out, spark by irreplaceable spark, in the hopeless swamps of the approximate, the not-quite, the not-yet, the not-at-all. Do not let the hero in your soul perish, in lonely frustration for the life you deserved, but have never been able to reach. Check your road and the nature of your battle. The world you desired can be won, it exists, it is real, it is possible, it's yours.' ?? ?? ?? ?? Harry Taylor ...read more.