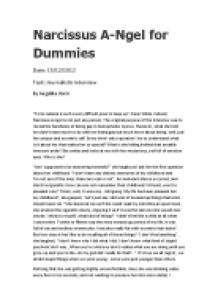 Narcissus A-Ngel for dummies - interview with a gay icon.

﻿Narcissus A-Ngel for Dummies Date: 15/12/1012 Task: Journalistic interview By Angelika Ourri ?To be natural is such a very difficult pose to keep up? Oscar Wilde. Indeed, Narcissus A-ngel is not just any person. The original purpose of the interview was to reveal the harshness of being gay in homophobic Cyprus. However, what she told me didn?t have much to do with her being gay but much more about being, well, just her unique and eccentric self. Every time I ask a question I try to understand what is it about her that makes her so special? What is she hiding behind that sneakily innocent smile? She smiles and looks at me with her mysterious, yet full of emotion eyes. Who is she? ?Am I supposed to be answering honestly?? she laughs as I ask her the first question about her childhood. ?I don?t have any distinct memories of my childhood and I?m not sure if the ones I have are real or not?. An awkward silence occurred, and she lit a cigarette. How can one not remember their childhood? ...read more.

She calmly replied that she just never bothered; also whoever wanted to be her friend would end unfitting in with her! ?If someone forced me to fit in or do something I wasn?t, I would just rebel against it eventually!? She lights another cigarette with the same seductive way she lit the first one and she carried on revealingeverything about her sexuality. When did she realise she was gay? Surprisingly enough, the reason she realised she is gay was the world known anime ?Sailor Moon?. ?I started watching sailor moon when I was twelve and I instantly fell in love with Haruka(for those who have never heard of this anime: Haruka is one of the main characters, she is gay and in a relationship with Michiru) She is my inspiration, who I want to be, who I actually am. She resembles me and I resemble her.? She suddenly sighedand carried on, her eyes lighting up. Apparently Haruka is who made Narcissus realise that she might be gay. ?It?s funny,?she laughed, ?because she doesn?t even exist?. The realization occurred when she comprehended that she was in love with both Haruka and her girlfriend Michiru. ...read more.

Being gay is nature and loving is God. People against the Lgbt community are just being ignorant. ?According to Narcissus things are improving and if we want this to continue we should start listening to people and stop under developing in human values. Narcissus is an upcoming artist; her dreams and ambitions for the future simple ?Fame, Women, Money, s*x, Fame and Health?. As this fascinating interview reached its end, I look at Narcissus, my best friend, I laughed and I said to her ?I have, or at least had, no idea who you are?. Narcissus is more than your average person or simply a gay person. Narcissus A-Ngel is an extraordinary artist. A woman that wants to and will change many things in this world. She lit another cigarette, laid comfortably on her sofa, looked at me with her captivating eyes and whispered. ?Now you know my kitten?. I look at her and it?s as if I?m looking at someone else, this extraordinary woman that I?ve known my whole life, someone far more familiar, and as I wonder, it hits me. Narcissus is Haruka, her gestures, the way she talks, the way she looks at you, everything about her is so unbelievably charming that it screams Haruka. She exhaled smoke, looked at me and said ?Keep on shining.? ...read more.