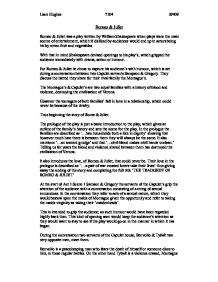 Romeo & Juliet Romeo & Juliet was a play written by William Shakespeare when plays were the main source of entertainment, which if disliked by audiences would end up in actors being hit by rotten fruit and vegetables. With that in mind Shakespeare devised openings to his play's, which gripped the audience immediately with drama, action or humour. For Romeo & Juliet he chose to capture his audience's with humour, which is set during a conversation between two Capulet servants Sampson & Gregory. They discuss the hatred they share for their rival family the Montague's. The Montague's & Capulet's are two equal families with a history of blood and violence, destroying the civilisation of Verona. However the teenagers of both families' fall in love in a relationship, which could never be because of the rivalry. Thus beginning the story of Rome & Juliet. The prologue of the play is just a basic introduction to the play, which gives an outline of the family's history and sets the scene for the play. ...read more.

On the other hand Tybalt is a violence crazed, Montague hater who says '... I hate the word as I hate hell' refereeing to the Montague family name and showing how strong his hatred is for the family. However his love of violence is his downfall as Romeo seeks revenge for the death of his close friend Mercutio. The Capulet servants are then joined by two other serving men, one being Abram. The two families then descend into an argument over an offensive thumb biting gesture made by Samson. After a brief argument Samson orders the Capulets to draw there swords, saying '...draw if you be men' enticing them to draw by insulting their status should they refuse battle. Shakespeare uses short sentences here to build up the tension between the families also making it a fast paced scene. However the brawl is interrupted by Prince Escalus who is furious that yet another brawl has broken out in the streets of Verona between the two families over '...an airy word' meaning that the two families have been brawling for meaningless reasons. ...read more.

daughter of the Capulets but is so madly in love that when a plan for Juliet's heart to stop and Romeo to meet up with her but the message never reached Romeo in tie and took himself to the place of Juliet's rest and takes poison at which point Juliet recovers only to take the rest of the poison to be with her lover. The two families' then decide to settle their differences because of the death of their '... star crossed lovers' Throughout the play Shakespeare illustrates his impressive writing skills by leaving the audience on edge from time to time and leaving them asking questions what will happen next in the storyline. From Act 1 Scene 1 alone the audience are left asking themselves many questions will there be more fighting? , Will the Lord's pay the forfeit of life? , Will Romeo find love? , Will there be any more humour? This is a particularly good introduction to the play as within minutes of the start there is plenty to keep the audience enticed. Liam Hughes 7104 39409 ...read more.