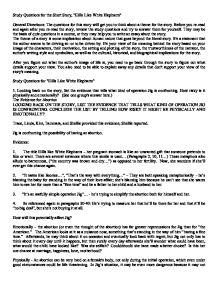 Study Questions for the Short Story, &quot;Hills Like White Elephants&quot; by Hemingway

Study Questions for the Short Story, "Hills Like White Elephants" General Directions: The questions for this story will get you to think about a theme for the story. Before you re-read and again after you re-read the story, review the study questions and try to answer them for yourself. They may be the basis of quiz questions in a course, or they may help you to write an essay about the story. The theme of a story is some implication about human nature that goes beyond the literal story. It's a statement that the author seems to be driving at--or to be driven by. It's your view of the meaning behind the story based on your image of the characters, their motivation, the setting and plotting of the story, the trustworthiness of the narrator, the author's writing style and symbolism, as well as the cultural, historical, and biographical implications for the story. After you figure out what the author's image of life is, you need to go back through the story to figure out what details support your view. You also need to be able to explain away any details that don't support your view of the story's meaning. Study Questions for "Hills Like White Elephants" 1. Looking back on the story, list the evidence that tells what kind of operation Jig is confronting. How risky is it physically and emotionally? (See one group's answer here.) The Evidence for Abortion LOOKING BACK ON THE STORY, LIST THE EVIDENCE THAT TELLS WHAT KIND OF OPERATION JIG IS CONFRONTING. CONCLUDE THE LIST BY TELLING HOW RISKY IT MIGHT BE PHYSICALLY AND EMOTIONALLY? Trace, Linda, Kim, Tammara, and Shellie provided this evidence; Shellie reported. Jig is confronting the possibility of having an abortion. Evidence: 1. The title Hills like White Elephants - her pregnant stomach is like an unwanted gift that someone pretends to like or want. ...read more.

Although he continued to write novels and stories throughout his career, the early short stories are often considered to be among his finest works. ''Hills Like White Elephants,'' a widely-anthologized and much-discussed story, offers a glimpse at the spare prose and understated dialogue that represents Hemingway's mastery of style. The story, told nearly in its entirety through dialogue, is a conversation between a young woman and a man waiting for a train in Spain. As they talk, it becomes clear that the young woman is pregnant and that the man wants her to have an abortion. Through their tight, brittle conversation, much is revealed about their personalities. At the same time, much about their relationship remains hidden. At the end of the story it is still unclear as to what decision has or has not been made, or what will happen to these two characters waiting for a train on a platform in Spain. Summary: The story opens with the description of distant hills across a river in Spain. An American and his girlfriend sit outside a train station in the heat. No other details about their relationship are provided at the beginning of the story. They decide to order beer, and the woman who works at the bar brings the drinks to their table. The girl remarks that the distant hills look like white elephants, but the man discounts her remark. The story continues to unfold through dialogue, and it becomes clear that the girl, Jig, does not understand Spanish while the American does. Three-Day Blow The main characters are Bill and Nick. The story is basically a conversation between the two. Nick and Bill sat and talked about baseball and books they read as they drank whiskey. They were wanting to drink until they got drunk. Nick had been going with Marjorie, and they were going to get married. However, they broke up and went their separate ways. ...read more.

The man, however, asks her to "come on back in the shade...You mustn't feel that way" (Hemingway, 276). The man shows, through this statement, that he is not in favor of her fertility; rather, he wants her to step back into the shade, into the view of the barren land, and into the idea of having an abortion. Hemingway, through the use of the fertile land, shows the girl's thoughts of possibly giving birth to the baby. Ernest Hemingway, in "Hills Like White Elephants," uses Jig's thought processes concerning the surrounding landscape to provide insight into her indecision about her abortion. While the dry, barren land represents her thoughts on having the abortion, the fertile land represents her idea of abandoning the idea of the abortion and giving birth to the child. Even further, however, Hemingway uses her location while viewing the contrasting sides of the valley to suggest her personal opinion on the abortion. Scholars suggest that the setting alone can provide enough information so that the reader can decide if Jig has the abortion or gives birth to the child. The key to understanding the couple's decision lies in interpreting what the man does with the baggage and which side of the station he places the luggage. At the end of the short story, the "man moves the bags to the 'other' side (and incidentally, into the light)" (Justice, 7). Justice suggests that through this movement of stepping into the light, the man accepts the fact that Jig wants to give birth to the unborn child. Jig remains the sole contact to the symbolic meaning of the setting until the end of the story, when Hemingway brings the man into the light. Through stepping into the light, he shows that the man is seeing the woman's side of the abortion situation and is accepting her decision to give birth. Hemingway travels through the couple's thought processes, showing how the landscape represents their various feelings toward giving birth to the unborn child or aborting the child. ...read more.