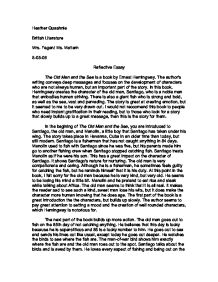 The Old Man and the Sea is a book by Ernest Hemingway. The author's writing conveys deep messages and focuses on the development of characters who are not always human, but an important part of the story

Heather Quashnie British Literature Mrs. Fegan/ Ms. Mattern 5-05-06 Reflective Essay The Old Man and the Sea is a book by Ernest Hemingway. The author's writing conveys deep messages and focuses on the development of characters who are not always human, but an important part of the story. In this book, Hemingway creates the character of the old man, Santiago, who is a noble man that embodies human striving. There is also a giant fish who is strong and bold, as well as the sea, vast and pervading. The story is great at creating emotion, but it seemed to me to be very drawn out. I would not reccomend this book to people who need instant gratification in their reading, but to those who look for a story that slowly builds up to a great message, then this is the story for them. In the begining of The Old Man and the Sea, you are introduced to Santiago, the old man, and Manolin, a little boy that Santiago has taken under his wing. ...read more.

The first part of the book is a great introduction the the characters, but builds up slowly. The author seems to pay great attention to setting a mood and the creation of well rounded characters, which Hemingway is notorious for. The next part of the book builds up more action. The old man goes out to fish on the 85th day of not catching anything. He believes that this day is lucky because he is superstitious and 85 is a lucky number to him. He goes out to sea and sends his lines out like usual, except today he goes out deeper. He watches the birds to see where the fish are. The man-of-war bird shows him exactly where the fish are and the old man roes out to the spot. Santiago talks about the birds and is awed by them. He loves every aspect of fishing and being out on the ocean. Santiago finally hooks a fish and waits for it to circle around before he can harpoon it. ...read more.

During the whole ordeal, the old man protects the fish as if it were a relative. Even in the fish's death, Santiago continues to feel connected to it. He felt bad slaying the marlin, but he did what a fisher must do and brings home his living. The conclusion of the book leaves you with yet again, deep emotions. You feel sorry that the fish has to die, but you also feel a hreat admiration for the old man. Santiago goes through a lot and never gives up. He finds the beauty in everything and tries to treat every creature with love and compassion. The story ends beautifully. Overall, The Old Man and the Sea was a pretty good book. It does not have a lot going on as far as action, but the whirlwind of feelings is enough to keep you reading. I did enjoy most of the book even though it got off to a slow start. Hemingway is wonderful at creating realistic characters and it shows that he really understands human nature. I would reccomend this book to any deep thinkers and those who like to be in touch with their emotions. ...read more.