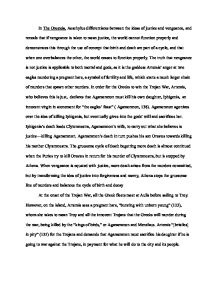 In The Oresteia, Aeschylus differentiates between the ideas of justice and vengeance, and reveals that if vengeance is taken to mean justice, the world cannot function properly and demonstrates this through the use of concept that birth and death are part of a cycle, and that when one overbalances the other, the world ceases to function properly. The truth that vengeance is not justice is applicable to both mortal and gods, as it is the goddess Artemis' anger at two eagles murdering a pregnant hare, a symbol of fertility and life, which starts a much larger chain of murders that spawn other murders. In order for the Greeks to win the Trojan War, Artemis, who believes this is just, declares that Agamemnon must kill his own daughter, Iphigenia, an innocent virgin in atonement for "the eagles' feast" ( Agamemnon, 138). Agamemnon agonizes over the idea of killing Iphigenia, but eventually gives into the gods' will and sacrifices her. Iphigenia's death leads Clytemnestra, Agamemnon's wife, to carry out what she believes is justice-killing Agamemnon. Agamemnon's death in turn pushes his son Orestes towards killing his mother Clytemnestra. The gruesome cycle of death begetting more death is almost continued when the Furies try to kill Orestes in return for his murder of Clytemnestra, but is stopped by Athena. ...read more.

of Troy, and that by dying she will be free at last. After Cassandra goes into the room, the Chorus follows and they find both Agamemnon dead and Clytemnestra covered in "great sprays of blood" and reveling in it "like the Earth when the spring rains come down" (1410-1412). Clytemnestra sees Agamemnon's death as a gift from the gods, and feels reborn after committing the terrible act of killing him. When Clytemnestra kills Agamemnon, the sense of wrong and decay is the strongest in the entire Oresteia. By killing Agamemnon, Clytemnestra believes that there will be "no more grief" (1688) and that she and her lover Aegisthus "have too much to reap" out of their "mighty harvest of despair" (1689). What she does not understand though, is that by killing both Agamemnon and Cassandra, not pouring the required libations on his body and cheating on Agamemnon with Aegisthus, she has broken two of the gods' laws; a marriage contract and a dead person's rights, which makes it necessary for Orestes to follow the laws of the gods and kill Clytemnestra. By killing his mother Cytemnestra, Orestes follows the laws of the gods but at the same time incurs the wrath of the Furies because they exist to revenge the dead person that was killed by a member of their family. ...read more.

Orestes argues back that he killed his mother because Apollo told him too, and that the gods' laws are greater than anyone else's. Through a vote with Athena as the tie breaker, Oretes is determined to be innocent. The Furies are insane with anger threaten Athena that they will curse the land to burn it sterile" (798) and by doing so, will have enacted their own Justice upon mankind because Athena did not allow them to fulfill their duty and kill Orestes. Athena stops the Furies here, and asks the leader if she would "vent your anger, hurt the land?" all for the sake of one man. Athena says that justice is not vengeance, it is fairness and truth, which are everything that Athena embodies, meaning that Athena is Justice, not that the Furies vengeance is justice. Athena displays her powers of mercy and forgiveness by offering the Furies a position not held by any god; they will be called the Blessed Ones, or the Eumenides. The leader accepts Athena's proposition and can "feel the hate, the fury slipping away" while Athena tells them to "take root in the land" so that nothing will thrive without the blessings of the Eumenidies. This establishes that Athena's brand of justice-mercy and compassion-is the true kind of justice as it does not foster more hate and corruption, but instead cultivates growth and abundance. ...read more.