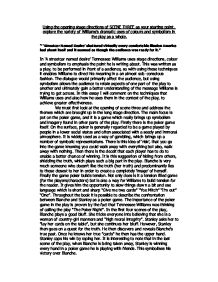 Using the opening stage directions of SCENE THREE as your starting point, explore the variety of Williams's dramatic uses colour and symbolism in the play as a whole.

Using the opening stage directions of SCENE THREE as your starting point, explore the variety of Williams's dramatic uses of colours and symbolism in the play as a whole. "' 'Streetcar Named Desire' shattered virtually every comfortable illusion America had about itself and it seemed as though the audience was ready for it." In 'A streetcar named desire' Tennessee Williams uses stage directions, colour and symbolism to emphasis the point he is writing about. This was written as a play, to be performed in front of a audience, so with using these techniques it enables Williams to direct his meaning in a an almost sub-conscious fashion. The dialogue would primarily affect the audience, but using symbolism allows the audience to relate aspects of one part of the play to another and ultimately gain a better understanding of the message Williams is trying to get across. In this essay I will comment on the techniques that Williams uses and also how he uses them in the context of the play, to achieve greater effectiveness. We must first look at the opening of scene three and address the themes which are brought up in the long stage direction. The main focus is put on the poker game, and it is a game which really brings up symbolism and imagery found in other parts of the play. Firstly there is the poker game itself. On the surface, poker is generally regarded to be a game played by people in a lower social status and often associated with a seedy and immoral atmosphere. ...read more.

This in itself brings death straight into the novel, that everyone comes to an end and ultimately dies. Although Blanche does not actually 'die' her whole demeanor and mental state practically ceases to exist as she is taken off to the mental institute. Williams uses props to symbolize certain things in the play. One of these includes a liquor bottle. It appears throughout the play and has different meanings for different characters. For Blanche it is way to escape the 'real' world. She almost drowns her sorrows, sorrows that have escalated throughout her turbulent life. Blanche seeks refuge in alcohol, and this collapse into alcoholism meets the end in scene 10 when she brakes the bottle to attack Stanley. It shows how far Blanche has descended into a miserable state, that she has to rely on the bottle (alcohol) to protect herself. The fact that Stanley dismisses this attack by grabbing the bottle might suggest that deep down Blanche knows that alcohol isn't going to save her but is merely an attempt to escape the real world. In Stanley's case, the alcohol is something that turns him into a more violent and aggressive person. He is under the influence when he attacks Stella "We've been drinking beer". In the penultimate scene, he opens up a beer and a "...geyser of foam..." shoots up. This represents the male e*********n and once again emphasizes the primitive s****l nature that Stanley is closely linked to. ...read more.

In the very first stage direction we are introduced to the Blue Piano. This reflected how black-American culture has become integrated into white society. The actual style of music reflects the ambivalent nature of society. This type of music was known to be joyful and yet sorrowful at the same time. The fact that the Blue piano "...expresses the spirit of the life which goes on here" shows how even in the dirtiest, run-down slums there is hope. It also signified, and used by Williams to symbolize, the primitive life force of Stanley. Another piece of music that arises in the play is the Varsouviana (a Polka tune). This again, like the thunder and trains, reminded Blanche of her past. It reminded her of a particular moment in her life; the death of her boyfriend Allan. This death and recollection of events symbolizes Blanches attempts to get away from her past, but it is a past that always catches up with her. Allan's death also symbolizes the pain that Blanche has suffered, the fact that she has been let down so many times which (may) evoke a lot of sympathy for Blanche. Williams once said that, "poetry doesn't have to be words...it can be situations." In 'A Streetcar Named Desire' Williams explores the use of symbols, props, sounds to emphasis the points that he is trying to get across. The play itself is very much a metaphor for the degeneration of society as a whole and that brute force will always overcome 'fantasy' and desire. By Callum Self ...read more.