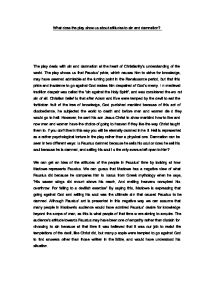 What does the play show us about attitudes to sin and damnation?

What does the play show us about attitudes to sin and damnation? The play deals with sin and damnation at the heart of Christianity's understanding of the world. The play shows us that Faustus' pride, which causes him to strive for knowledge, may have seemed admirable at the turning point in the Renaissance period, but that this pride and insolence to go against God makes him despaired of God's mercy. I n medieval tradition despair was called the "sin against the Holy Spirit", and was considered the worst sin of all. Christian belief is that after Adam and Eve were temped by the devil to eat the forbidden fruit of the tree of knowledge, God punished mankind because of this act of disobedience, he subjected the world to death and before men and women died they would go to h**l. However, he sent his son Jesus Christ to show mankind how to live and now men and women have the choice of going to heaven if they live the way Christ taught them to. If you don't live in this way you will be eternally damned in h**l. h**l is represented as a rather psychological torture in the play rather than a physical one. Damnation can be seen in two different ways: Is Faustus damned because he sells his soul or does he sell his soul because he is damned, and selling his soul is the only avenue left open to him? We can get an idea of the attitudes of the people in Faustus' time by looking at how Marlowe represents Faustus. ...read more.

I think Faustus begins to realise that his sin was pointless and that he won't get what he wants and uses his time and "power" to be mischievous by playing practical jokes like those on the pope and the horse-courser, to distract himself. Faustus must have been scared of what will happen to him after his contract has ended. Faustus is guilty of many sins (not just that of opposing god and selling his soul), pride being the greatest. Faustus' real sin is not his conjuring, but his denial of God's power and majesty. We can sense Faustus' from the very beginning of the play from Faustus' tone. An example of this is when he talks about all his achievements at the beginning and says, "A greater subject fitteth Faustus' wit" and when he boastfully asks, "The end of physic is out body's health, why Faustus, hast thou not attained that end?" It is pride that damns him completely. All his other sins are different aspects of this key sin. Even his despair, at the end of the play, is another aspect of the same thing. Pride refuses to acknowledge God's power in the same way in which despair denies God's mercy. Throughout the play Faustus has doubts about what he is doing and thinks of repenting but it is his pride that keeps him from turning to God and asking for forgiveness. This happens throughout scene 5 where he doubts his actions, thinks of repenting and then because of his pride he becomes resolute again. ...read more.

The attitude towards damnation must have been a very frightening one, and we can see this from the way that the devils came and dragged Faustus away and in Marlowe's time this would have been a realistic end if devil's were believed to be real figures. Damnation, then, could be seen as inevitable like Faustus says in the beginning, "If we say we have no sin, we deceive ourselves, and there is no truth in us. Why then belike we must sin". From "Dr Faustus" we can assume that the attitude towards sin was that it was pointless and that there is nothing to gain from opposing God. By sinning in this way Faustus loses God's love, cannot give love to a wife, gains no power to control anyone, and does not come to know more than he had discovered after being "graced" with a doctor's name. The play also shows that pride was the cardinal sin which led to all the other sins and the irrevocable sin - despair. The attitude of the people in Marlowe's time would have been that this despair of God's mercy, rejected you of God's mercy because without faith you cannot forgive with the hope of being forgiven and were therefore damned. The 16th century idea of damnation, was terrifying devils, fire and h**l but damnation was also seen as a state of mind and that you could be on Earth but still in "h**l" which Faustus could be considered to have been in from the very beginning, making him incapable of repenting. However we can still argue whether Faustus is damned because he sells his soul or he sells his soul because he is damned. ...read more.