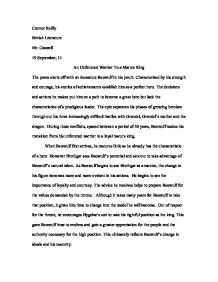 When Beowulf first arrives, he matures little as he already has the characteristic of a hero. However Hrothgar sees Beowulfs potential and sets out to take advantage of Beowulfs natural talent.

Connor Reilly British Literature Mr. Caswell 19 September, 11 An Unfettered Warrior To a Mature King The poem starts off with an immature Beowulf in his youth. Characterized by his strength and courage, his stories of achievements establish him as a perfect hero. The decisions and actions he makes put him on a path to become a great hero but lack the characteristics of a prodigious leader. The epic separates his phases of growing heroism through out his three increasingly difficult battles with Grendel, Grendel's mother and the dragon. During these conflicts, spaced between a period of 50 years, Beowulf makes his transition from his unfettered warrior to a loyal mature king. When Beowulf first arrives, he matures little as he already has the characteristic of a hero. However Hrothgar sees Beowulf's potential and sets out to take advantage of Beowulf's natural talent. ...read more.

This is evident in the comparison of Beowulf's speeches before his first battle with Grendel and his final encounter against the dragon. The first speech depicts Beowulf as a self-confident warrior looking for the honor from the people. He portrayed himself as a stronger and braver warrior then the rest, promising to fight without weapons or shields only to gain extra glory for himself. "I have heard moreover that the monster scorns?in his reckless way to use weapons;?therefore, to heighten Hygelac's fame?and gladden his heart, I hereby renounce?sword and the shelter of the broad shield,?the heavy war-board: hand-to-hand?is how it will be, a life-and-death?fight with the fiend (433-440) ." At this point in his life he cared about his image and wanted to be the greatest hero ever. He is also motivated by the promise of everything he has ever desired. ...read more.

The actions of Beowulf at the beginning of the epic show arrogance and haughtiness, making the Danes irrelevant in Beowulf's quest to be famous. As Beowulf grows older and experience more battles, he learns what is truly important to him. Beowulf's last battle was not meant to make people remember him as the greatest warrior, but to make them remember him as the most loyal and dedicated leader they have ever had. This change in mindset, is the greatest example in showing that Beowulf did grow in heroic stature. The epic isn't about being the bravest or the strongest. It teaches the importance of courtesy, loyalty, wisdom and fortitude. These are the characteristic needed to be that great leader that Beowulf wanted to become as he became more mature. The change in his outlook and mentality through out the stages of his life, from an arrogant warrior to the loyal leader that died for his people, truly shows the growth in Beowulf's heroic stature. ...read more.