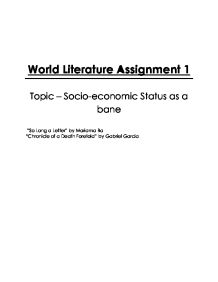 Socio-economic status as a bane

World Literature Assignment 1 Topic - Socio-economic Status as a bane "So Long a Letter" by Mariama Ba "Chronicle of a Death Foretold" by Gabriel Garcia "It is a truth universally acknowledged that a single man in possession of a good fortune must be in want of a wife" (Pride and Prejudice by Jane Austen) This essay will look at Gabriel Garcia's Chronicle of a Death Foretold and Mariama Ba's So Long a letter in relation to the topic 'Social and Economic Status as a bane of women Empowerment'. Gabriel Garcia and Mariama Ba in their works have depicted women's eagerness for social and economic status to empower themselves. Women were shown to have gone as far as destroying their children's happiness for their own desires and satisfactions. For example a number of them have used their daughters by marrying them off to men in possession of a good fortune, regardless of what their daughters felt about the men. The women in the forefront who were in the lookout for social and economic status to empower themselves were Pura Vicario from Chronicle of a Death Foretold, Binetou's and Ramatoulaye's mothers and Aunty Nabou, from So Long a Letter. ...read more.

She saw her welfare in wealth and financial stability, a man twice the age of her daughter or a man with already twelve children did not matter to Binetou's mother. So, it was evident that Binetou's mother's intentions were not for her daughter's good but rather for her own desire to empower herself by gaining socio-economic status. Ramatoulaye's mother also seemed to desire social and economic status. She also in a way preferred her daughter Ramatoulaye to choose wealth over love. She did not like her daughter's choice of Modou amid knowing that they both loved each other; she wanted her to marry Dauda Dieng because of his higher socio-economic status as opposed to Modou, since he was a doctor. Similarly, Aunty Nabou wanted her son Mawdo to marry someone from the same caste to upkeep the family's status. She totally regretted his marriage to a goldsmith's daughter Aissatou. Aunty Nabou saw her son, a man of higher caste marrying a blacksmith daughter, as a humiliation to her and a stain to her generation. Therefore, she decided to bring her brother, Farba Diouf's daughter Young Nabou to marry her with her son. ...read more.

So, unlike Aunty Nabou in Chronicle of a Death Foretold, Alberta did not see her son's marriage to Angela as a humiliation or threat to their social and economic status. Perhaps she was aware of son Bayardo's love for Angela and therefore she saw her as the right girl for him. In conclusion, it can be clearly seen social and economic status as a bane of women empowerment. Women sought of empowering themselves through social and economic status by marrying of their daughters to a man with good fortune. Their views on marriage of their daughters entailed their own self-centeredness as they were mainly concerned about their own selfish struggle and fears of financial stability and a secured future. Love was never a factor for the mothers in the marriage of their daughters; they did not care how their daughters' felt about the man. Mariama Ba and Gabriel Garcia show that those women strongly believed that a person's worthiness is not determined by personality or love but by wealth. The only importance they saw was financial stability and socio-economic status, unlike a few other characters that were aware of the importance of love, financial stability, and happiness as a whole. ?? ?? ?? ?? Page | 2 ...read more.