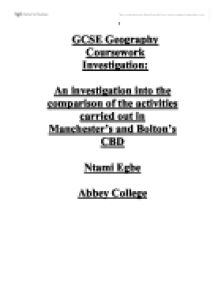 An investigation into the comparison of the activities carried out in Manchester's and Bolton's CBD.

This is because most shoppers will travel in the late morning when there's less congestion, so places like the north of Greater Manchester with its limited transport doesn't suffer. There are people from Blackpool to Whaley Bridge. With the information collected with my own individual data it was possible to see that with workers there was a large influx of people from Chorley and Egerton in the north and to the south it was possible to see people coming from Bury and Farnworth. Q2) What is the sphere of influence of Manchester's CBD? Data Collection The main way we collected our data to discover the sphere of influence was to carry out a questionnaire in St Anns Square. We carried out a pilot study so we could see if we would encounter any difficulties, so they could be corrected before we carried out the proper fieldwork. We asked random members of the public specific questions about their age, their postcode, their purpose for being in Manchester, how they travelled into the Manchester and other related questions. See figure 4 for a sample of the questionnaire. I carried out 100 questionnaires within St Anns Square because that specific number was large enough for reliable results. I also carried out my own individual data collection by carrying out my own questionnaire (figure 5) ...read more.

Another limitation was the weather it wasn't a very good day, it was over cast, cold and drizzly so some people wouldn't have decided to go to the CBD on that day, and they could have been important to the investigation. Improvements The main way I thought we could have improved my project was if we had had a full day to collect the data. If we had more time to collect data a lot of the errors experienced would have not occurred. If we had carried out more questionnaires in Manchester we could have had a better range of results, and not as many anomalies. With my own personal data if I had have done at least double the amount I originally did my results would be even, more reliable. Overall Summary To sum up the project I think Manchester is a large bustling city, which houses a wide variety of activities. The main two of these activities are shopping and working. Manchester accommodates both of these and with its large sphere of influence it not only attracts people from Manchester itself but also people from nearby towns and villages. Most of these people will travel by train. In comparison Bolton has a smaller population and so doesn't carry out as many activities. Its sphere of influence is only a small regional one so due to the sphere of influence being small and people living nearby mostly come in by car. 1 ...read more.