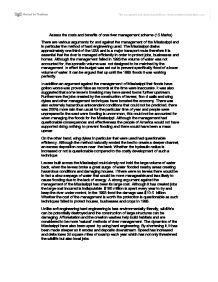 Assess the costs and benefits of one river management scheme (15 Marks) There are various arguments for and against the management of the Mississippi and in particular the method of hard engineering used. The Mississippi drains approximately one third of the USA and is a major transport route therefore it is essential that the river is managed efficiently in order to protect jobs, businesses and homes. Although the management failed in 1993 the volume of water was not accounted for, the sporadic volume was not designed to be matched by the management. In effect the budget was set out to prevent specifically flood of a lower volume of water, it can be argued that up until the 1993 floods it was working perfectly. ...read more.

On the other hand, wing dykes in particular that were used had questionable efficiency. Although the method naturally eroded the bed to create a deeper channel, an excess deposition occurs near the bank. Whether the hydraulic radius is increased or not is questionable compared to the costly development of such a technique. Levees built across the Mississippi could simply not hold the large volume of water back, when the levees broke a great surge of water flooded nearby areas creating hazardous conditions and damaging houses. If there were no levees there would be in fact a slow seepage of water that would be more manageable and less likely to cause flooding due to the lack of energy. ...read more.

The dynamics of the Mississippi have also been upset by using hard engineering. By shortening it, it has been made steeper so it erodes and deposits downstream. Speed has increased and delta loses 35 square miles of swamp each year which has not only threatened the wildlife but also local jobs. In my opinion the flood management schemes are costly but essential. But for the management techniques used a lot more damage would have been created. It must been seen that the Mississippi needs to be controlled as there would be huge public opposition to simply "doing nothing". Finally the management employed was only designed to protect the local areas of a certain river discharge; they were not designed to prevent flooding of such magnitude in 1993 and therefore were not at fault for the damage generated. ...read more.

This answer shows that the author knows something about the Mississippi river management scheme, although some elements should be explained further. It contains some relevant case study information, including financial details. However, it does not make direct reference to the key words in the question - costs and benefits - and as a result seems to be answering a different question. More attention to the question as set would make a big difference.