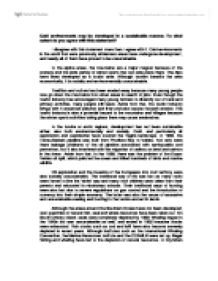 Cold environments may be developed in a sustainable manner. To what extent do you agree with this statement?

Cold environments may be developed in a sustainable manner. To what extent do you agree with this statement? I disagree with this statement more than I agree with it. Cold environments in the world that were previously wilderness areas have undergone development, and nearly all of them have proved to be unsustainable. In the alpine areas, the mountains are a major magnet because of the scenery and the wide variety of winter sports that can take place there. The Alps have been developed as a tourist area. Although tourism benefits the area economically, it is socially and environmentally unsustainable. Tradition and culture has been eroded away because many young people now go down the mountains into urban areas in search of jobs. ...read more.

Aside from that, in the 1989, there was the problem of the Exxon Valdez oil spill, which polluted the ocean and killed hundreds of birds and marine wildlife. Oil exploration and the invasion of the Europeans into Inuit territory were also socially unsustainable. The traditional way of life was lost as many Inuits were forced to live the 'white' way and many Inuit children were taken from their parents and educated in missionary schools. Their traditional ways of hunting were also lost due to severe regulations on gun control and the introduction of currency into their simple economy. The latter was also the cause of excessive and unsustainable sealing and hunting in the tundra and arctic lands. Although the areas around the Southern Ocean have not been developed, vast quantities of natural fish, seal and whale resources have been taken out. ...read more.

Scientific and research stations, although few, have contributed to waste generated in the area, along with footpath erosion. Most of the waste is shipped to the UK for processing, but what remains cannot decompose easily in the cold climate. Due to efforts of the Antarctic Treaty ratified in 1991 and much pressure from the environmental groups however, the Antarctic region has largely remained untouched. Where development takes place, it cannot be said to be sustainable, because changes have to be made to the area to accommodate people and people contribute to environmental degradation at the very least, even if great care is taken not to disturb or disrupt natural environments. The development of cold environments is mainly unsustainable, although tourism in Antarctica seems to be otherwise. Who knows, however, whether it will remain sustainable in the future because of increased tourism, or because of better technology to fuel mass tourism. ...read more.

A good overview of sustainability in cold environments. In some places further specific examples would strengthen the argument, however generally this is a good answer.