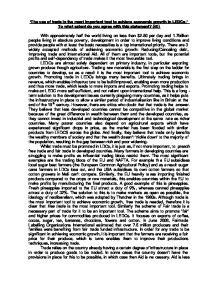 The use of trade is the most important tool to achieve economic growth in LEDCs. To what extent do you agree with this statement?

'The use of trade is the most important tool to achieve economic growth in LEDCs.' To what extent do you agree with this statement? (40) With approximately half the world living on less than $2.50 per day and 1.7billion people living in absolute poverty, development in order to improve living conditions and provide people with at least the basic necessities is a top international priority. There are 3 widely accepted methods of achieving economic growth: Reducing/Canceling debt, Improving trade and International Aid. All of them are important tools, but the potential profits and self-dependency of trade makes it the most favourable tool. LEDCs are almost solely dependent on primary industry, in particular exporting grown produce though agriculture. Trading raw materials is the first step on the ladder for countries to develop, so as a result it is the most important tool to achieve economic growth. Promoting trade in LEDCs brings many benefits. Ultimately trading brings in revenue, which enables infrastructure to be built/improved, enabling even more production and thus more trade, which leads to more imports and exports. Promoting trading helps to make an LEDC more self-sufficient, and not reliant upon international help. This is a long-term solution to the development issues currently plaguing many countries, as it helps puts the infrastructure in place to allow a similar period of industrialisation like in Britain at the end of the 19th century. ...read more.

It focuses on exports of coffee, cocoa, sugar, tea, bananas, chocolate, flowers and cotton. In June 2008, Fairtrade Labelling Organizations International estimated that over 7.5 million producers and their families were benefiting from fair trade funded infrastructure. In order for any trade to be significant in achieving economic growth, it is important that the farmers are receiving a fair price for their produce, which is turns enables them to improve their productions techniques, increasing trade. Trade relies on the country already having a certain degree of infrastructure in place in order to produce goods to be traded. In some cases the country doesn't have the provisions in place for this to be possible, in which case then Aid is necessary. Aid is less significant in achieving economic growth than trade because it only provides the means for growth, trade is what actually causes the profits which defines economic growth. There are three main types of Aid: Bilateral (government to government), Multilateral aid (government to international organisations such as WHO and UNESCO) and Non-governmental organisations (NGOs, charities such as Oxfam). Bilateral aid is often criticised heavily as it is 'top-down' and tied aid, and as a result it isn't that important as a tool to achieve economic growth. A good example of tied aid is a d*m built in Malaysia in the 1990s which was funded by international aid, most notably Britain. ...read more.

The debt which plagues many developing countries severely restricts their economic growth. Many, if not all, LEDC countries have huge loans, which the governments can't even afford the pay the interest on. Approximately one third of all aid is used to repay interest on loans. As a result of huge debts, organisations such as the IMF and World Bank force countries to restructure their spending so they can afford the payments. This has disastrous effects on the economies of LEDCs as they can't then afford to spend money to put the necessary infrastructure in place to achieve economic growth. Similarly to aid, canceling debt for developing countries would give countries the means to improve their economies, albeit through other means such as trading goods. In the majority of LEDCs there is no easy answer to achieve economic growth. Many countries do not have the necessary infrastructure and skilled workforce necessary, thus aid is very important to 'get the ball rolling'. However, aid can only help so much and the country has to be able to be self sufficient and support themselves without external assistance. By advocating fair and free trade in developed countries and promoting international trade in LEDCs, they can enjoy economic growth. Therefore, the use of trade is the most important tool in achieving economic growth in LEDCs. ...read more.