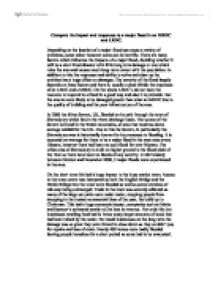 Compare the impact and responses to a major flood in an MEDC and LEDC.

Compare the impact and responses to a major flood in an MEDC and LEDC. Depending on the location of a major flood can cause a variety of problems, some minor however some can be horrific. There are many factors which influence the impacts of a major flood, deciding whether it will be a short lived disaster with little long term damage or one which ruins the area and causes much long-term unrest with the population. In addition to this the responses and ability to solve and clear up the problem has a huge effect on damages. The severity of the flood largely depends on these factors and there is usually a clear divide the responses of an LEDC and a MEDC. On the whole LEDC's do not have the resource to respond to a flood in a good way and also it is probable that the area is more likely to be damaged greater than what an MEDC due to the quality of building and the poor infrastructure of the area. In 2000 the River Severn, UK, flooded on its path through the town of Shrewsbury which lies in the rivers drainage basin. The source of the Severn is found in the Welsh mountains, an area that receives above average rainfall for the UK. ...read more.

In the town centre many shop keepers and residents were issued with sandbags to try and slow and divert water flow. Also boardwalks were setup in the town to try and make it possible for shopping and everyday life to continue as close to normal as possible. Long term responses consisted largely of the Environment Agency looking at the full length of the Severn and trying to find possible solutions to how the likeliness and the effects of a major flood could be reduced. Overall the effects of the flood were not disastrous as good emergency services and resources allowed a quick clean up operation and helped in repairing most damages. In comparison to the Shrewsbury flood the 2004 flood of Bangladesh is very different as it is an LEDC. It lies on the delta of 3 large rivers, the Ganges, the Brahmaputra and the Maghna. Each of these has their source in the Himalayas therefore snowmelt adds largely to the discharge of the rivers in the spring season. The Bangladesh area also experiences a monsoon climate, which means it has a wet season between May and September. During this season Bangladesh suffers from Cyclones that bring strong winds, intense precipitation and storm surges. ...read more.

In July 2004 the UN stepped in to help the country in devastation. Aid from individual countries was distributed via the UN as a disaster management team. The population did not rely solely on this aid however and they worked strongly within their own communities to help rebuild each others homes using self help schemes. Successful long term responses are hard to come by for an LEDC as the lack of funds restricts any new developments. Foreign aid and a loan from the World Bank were used to put in place river management. In addition to this flood shelters and early warning systems have been set up which, if major floods reoccur, many lives could be saved. Some of the money received was used to repair infrastructure, water resource management and education. Again all of these factors will save lives in the future. In conclusion a flood in an LEDC has much more disastrous impacts as the quality of infrastructure and response is far weaker. Only with the help of foreign aid can these disasters be improved and the impacts made to be less harmful. An MEDC however has the funds and the s general capability to control their rivers and prevent lots of damage being causes, whilst preventing loss of life also. ...read more.