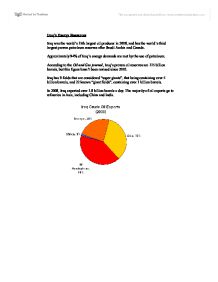 Iraq's Energy Resources Iraq was the world's 13th largest oil producer in 2008, and has the world's third largest proven petroleum reserves after Saudi Arabia and Canada. Approximately 94% of Iraq's energy demands are met by the use of petroleum. According to the Oil and Gas journal, Iraq's proven oil reserves are 115 billion barrels, but this figure hasn't been revised since 2001. Iraq has 9 fields that are considered "super giants", that being containing over 5 billion barrels, and 22 known "giant fields", containing over 1 billion barrels. In 2008, Iraq exported over 1.8 billion barrels a day. The majority of oil exports go to refineries in Asia, including China and India. According to Oil and Gas Journal, Iraq's proven natural gas reserves are 112 trillion cubic feet. This represents only 5% of Iraq's total energy consumption, with the other 95% being oil. ...read more.

Iraq's Regime Iraq has a strong political position due to the vast amount of oil it exports. Iraq had been part of the Ottoman Empire but After World War 1; Iraq was put under a mandate overlooked by Great Britain. As a result, oil concessions were made and GB controlled the Turkish petroleum company, who had an incredibly strong influence in Iraq, meaning threat before the coup of 1941 Britain controlled oil exports. The Turkish petroleum company's old influence is now controlled by The Iraq Petroleum Company. However, the old ties to Great Britain do not remain. The current regime still has obviously strong links with the US, even though American presence in the country is diminishing, after the (relative) peace of the last few years, although violence is still a regular occurrence, meaning that large oil companies are keen to stay away. ...read more.

Both of these countries are too strong to invade and politically dominate. Mahmud Ahmadinejad (Iran) and King Abdullah (Saudi Arabia) are politically dominant and therefore too difficult to seize power from. The West is extremely reliant upon oil and thus knew it had to secure resources of said oil as soon as possible. With Iran and Saudi Arabia being too strong, Iraq seemed a likely option. In 2003, Saddam Hussein's regime was ready for the taking and the idea of "weapons of mass destruction", although potentially plausible, was used as an excuse for the invasion. Note this is a cynical view that has been put forward by many top Politicians. It was hoped that the USA could gain control of Iraq's oil, modernise it with increased investment ($2.05 billion is to be put towards this modernisation next month) and thus obtain a secure and stable supply of oil. This clearly shows that Iraq's resources have lead to a huge amount of geopolitical activity, ultimately culminating in a war. ...read more.