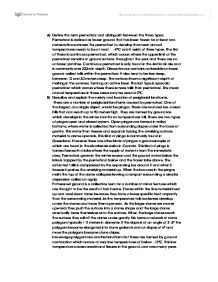 A) Define the term permafrost and distinguish between the three types. Permafrost is defined as frozen ground that has been frozen for at least two consecutive summers. For permafrost to develop the mean annual temperatures needs to be at most -4�C and it exists of three types. The first of these is continuous permafrost, which occurs where the upper limit of the permafrost remains at ground surface throughout the year and there are no unfrozen patches. Continuous permafrost is only found in the Arctic circle and is commonly over 300m in depth. Discontinuous contains noticeable unfrozen ground called talik within the permafrost. It also tend to be less deep, between 10 and 50 meters deep. ...read more.

However there are other kinds of pingos a good example of which are found in the Mackenzie delta in Canada. This kind of pingo is formed beneath a lake where the supply of water is from the immediate area. Permafrost grows in the winter season and the ground water below the lake is trapped by the permafrost below and the frozen lake above. The saturated talik is compressed by the expanding ice around it and when it freezes it pushes the overlying material up. When the ice core in the pingos melts the top of the dome collapses leaving a rampart surrounding a circular depression called an ognip. Patterened ground is a collective term for a number of minor features which are thought to be the result of frost heave. ...read more.

Ice wedge polygons are another landform but these are formed by ground contraction which occurs at very low temperatures of below -15�C. This low temperature causes cracks and fissures in the ground, and over many years these are enlarged by the freezing and thawing of summer meltwater. The cracks form a wedge shape becoming wider and deeper at a rate of 1-20mm per year, a good example of fossil ice wedges is the Long Hanborough Carrot is over 2m deep. Solifluction is a type of mass movement when the active layer becomes mobile as melting reduces the friction between the particles in the layer and between the layer and the permafrost. Due to the reduction in friction the mass movement can occur on slopes of only a couple of degrees. Tongue like features called solifluction lobes form at the base of the slope as the material spreads out and the gradient lessens. ...read more.