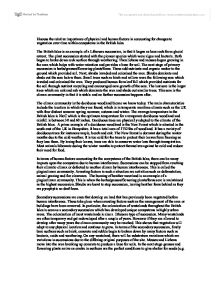 Discuss the relative importance of physical and human factors in accounting for changes to vegetation over time within ecosystems in the British Isles The British Isles is an example of a Lithosere succession, in that it began as bare rock from glacial retreat. The plant succession started with the pioneer species which were algae and bacteria. Both began to broke down rock surface through weathering. Then lichens and mosses began growing in the area which helps with water retention and provides a base for soil. The next stage of primary succession is herbs/grasses/flowering plants/ferns. These add nutrients and organic matter to the ground which provided soil. Next, shrubs invaded and colonised the area. Shrubs dominate and shade out the sere below them. Small trees such as birch and willow were the following sere which invaded and colonised the area. They produced humus from leaf fall which provided nutrients for the soil through nutrient recycling and encouraged new growth of the sere. The last sere is the larger trees which are oak and ash which dominate the area and shade out smaller trees. This sere is the climax community in that it is stable and no further succession happens after. ...read more.

In particular, the colonisation of wastelands throughout the British Isles is seen as a secondary succession which has developed unique ecosystems in highly urban areas. The colonisation of most wastelands is also a lithosere type of succession. Many wastelands are often temporary and get redeveloped after a couple of years. However if they are allowed to develop after many years the climax community may be reached. This shows that vegetation will adapt to any physical location and continue to grow. In terms of the secondary succession, firstly bare surfaces such as brick, concrete and rubble begin to broken down by many factors such as bacteria, acids and weathering. On any wasteland, there will be substratum variations which are variations in successions due to the differing original purposes of the site. Mosses and Lichens move into the area breaking up concrete to produce a base for soils. In the next stage grasses and flowering plants arrive as cracks in surfaces are the perfect conditions to give shelter for seeds (e.g. windblown) to germinate in. Common invaders are windblown seeds such as Oxford ragwort which has a long flowering seasons and produces millions of seeds. Many of these plants are adapted to tolerate waste ground, rubbish and debris and are known as ruderal species. ...read more.

However it is suggested that the growing season of some plants has extended. In terms of urban ecology, distinct ecologies have been found along routeways. They can be distinctive habitats because exotic species and insects can be brought in by traffic. Railway lines enable windblown seeds to be blown along with the trains meaning the plant will follow the railway lines. For example the Oxford ragwort is seen plentifully along this lines as railway lines echo its natural niche. Wildflowers are commonly seen along many road side as nitrogen rich exhaust fumes boost the growth of such flowers. Overall both physical and human factors are equally important in shaping the ecosystems of the British Isles today. However without the interference of humans on ecosystems, the British Isles will continue in succession as seen in the colonisation of wastelands. We can still not be sure if highly urban areas have an impact on vegetation. It has been noted that the growing season of some plants has been extended but it is unsure if this is a benefit of the urban micro-climate. In the long term this could have impacts on the vegetation diversity and overall survive in urban areas. Also with the growth of cities, it is vital that the deciduous woodland is protected through conservation areas otherwise it may disappear from the British Isles we know today. ...read more.

Overall rating: 5 out of 5 stars.
- Very professional impression overall due to well written grammar and use of terminology throughout both accurately and appropriate to the topic.
- One addition that seems fairly important would be the factor of global warming as a human factor.
- Good use use of specific named examples - both species and locations.
- Well explained processes and impacts in detail.