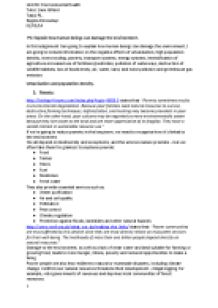 Enviromental Health - how humans can damage the environment

﻿Unit 38: Environmental Health Tutor: Jane Gillard Task1 P1, Regina Omosoluyi 02/05/14 P1: Explain how human beings can damage the environment. In this assignment I am going to explain how human beings can damage the environment, I am going to include information on the negative effects of urbanisation, high population density, overcrowding, poverty, transport systems, energy systems, intensification of agriculture-increased use of fertilisers/pesticides, pollution of waterways, destruction of wildlife habitats, loss of biodiversity, air, water, land, and noise pollution and greenhouse gas emission. Urbanisation and population density. 1. Poverty: http://biology-forums.com/index.php?topic=3659.0 states that: ?Poverty sometimes results in environmental degradation. Because poor families need natural resources to survive, destructive farming techniques, deforestation, and hunting may become prevalent in poor areas. On the other hand, poor cultures may be regarded as more environmentally aware because they live closer to the land and are more appreciative of its fragility. They have a vested interest in sustainable resource use.? If we?re going to reduce poverty in the long term, we need to recognise how it?s linked to the environment. We all depend on biodiversity and ecosystems, and the services nature provides ? but we often take them for granted. Ecosystems provide: * Food * Timber * Fibres * Fuel * Medicines * Fresh water They also provide essential services such as: * Water purification * Air and soil quality * Pollination * Pest control * Climate regulation * Protection against floods, landslides and other natural hazards http://www.wwf.org.uk/what_we_do/making_the_links/ states that: ?Poorer communities are most affected by this decline since they are most directly reliant on ecosystem services for their well-being. The livelihoods of more than one billion people depend directly on natural resources.? Damage to the environment, as well as a lack of clean water and land suitable for farming or growing food, leads to more hunger, illness, poverty and reduced opportunities to make a living. Poorer people are also less resilient to natural or manmade disasters, including climate change. ...read more.

As living organisms they can reproduce and pollute indefinitely?. So therefore genetic modification crops are harmful to the environment. The introduction of herbicide-tolerant GE crops to the US has resulted in a huge increase in both herbicide use, and the incidence of herbicide-resistant weeds. Roundup, the herbicide sold by Monsanto in conjunction with its Roundup Ready GE crops, has been shown to be a potential endocrine disrupter ? that is, it could interfere with our hormones. It is also toxic to certain wildlife, such as tadpoles. The introduction of GE canola has been shown to have serious biodiversity impacts. For example, a UK government study found there were 24% fewer butterflies in the margins of GE canola fields because there were fewer weed flowers (and hence nectar) for them to feed on. In addition, there were fewer seeds for birds. The use of Roundup on GE soy has also been shown to have an adverse impact on soil health, leading to reduced amounts of beneficial nitrogen-fixing bacteria in the soil. Insect-resistant GE crops (termed BT crops) have been shown to be toxic to ?non-target? organisms (such as butterflies) and beneficial insects (such as green lacewings). They also threaten soil and water ecosystems, since many BT crops secrete BT toxins from the root into the soil. Agricultural wastes from BT maize have been identified entering water courses. BT crops are intended to prevent the need for three applications of insecticide. Yet BT maize varieties continuously release a toxin into the environment in quantities 3000?5000 times higher than the sprays used for non-GM farming. In 1935, some 3000 imported cane toads were introduced in north Queensland to control native cane beetle populations. Today, cane toad numbers exceed 200 million, spreading into neighbouring states and threatening local biodiversity. We learnt an important lesson from this ? playing around with natural ecosystems can have unpredictable effects which are extremely difficult to undo. ...read more.

If this world really wants clean environment, then the crucial thing to do is to stop the two most common types of pollution, namely the air and the water pollution. However, world still looks to be lacking global will needed for such an action and this is the reason why these two forms of pollution will continue to deteriorate our environment for years to come. The aquatic life is mostly affected with water pollution, and water pollution can even lead to an extinction of some animal species, like this was the case with the Yangtze River Dolphin. Chemical compounds and other water pollutants cause aquatic animals difficulties with breathing while on the other hand these chemicals can also be quite toxic for land animals once they drink this polluted water. The environmental damage of water pollution doesn't stop there, water pollution also increases the impact of air pollution, and because the more polluted water gets the better chance there is that some of these pollutants will evaporate into air. Polluted water is also one of the major contributing factors to acid rain creation, and generally speaking this is certainly one of the biggest environmental problems. Info taken from: http://pollutionarticles.blogspot.co.uk/2010/12/how-does-water-pollution-affect-our.html 1. Noise Pollution In humans, apart from annoyance, exposure to high levels of noise for a long period can increase blood pressure, cause deafness, and other cardiac issues. Noise also has detrimental effects on the growth of some plants. Birds as well rely on hearing to help find them to prey; hence, they are seriously disadvantaged by noise. 1. Carbon monoxide emissions. Carbon emissions, most notably carbon dioxide (CO2), are part of a collection of gases that negatively influence the quality of our air and increase the greenhouse effect. Greenhouse gases have a direct influence on the environment, causing extreme weather changes, a global temperature increase, the loss of ecosystems and potentially hazardous health effects for people. http://curiosity.discovery. ...read more.