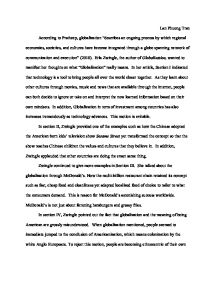 Erla Zwingle, the author of Globalization, wanted to manifest her thoughts on what Globalization really means. In her article, Section I indicated that technology is a tool to bring people all over the world closer together.

Lan Phuong Tran According to Pratheep, globalization "describes an ongoing process by which regional economies, societies, and cultures have become integrated through a globe spanning network of communication and execution" (2010). Erla Zwingle, the author of Globalization, wanted to manifest her thoughts on what "Globalization" really means. In her article, Section I indicated that technology is a tool to bring people all over the world closer together. As they learn about other cultures through movies, music and news that are available through the internet, people can both decide to ignore or take on and interpret the new learned information based on their own mindsets. In addition, Globalization in term of investment among countries has also increases tremendously as technology advances. ...read more.

When globalization mentioned, people seemed to immediate jumped to the conclusion of Americanization, which means colonization by the white Anglo Europeans. To reject this motion, people are becoming ethnocentric of their own culture. What they do not realize is that they have turn into the exact same thing that they hate the most. Zwingle gave example of the Russian kid representing American culture from his punk haircut, his love for rock music, to the clothes that he wears and yet hypocritically announced that he is glad he is not an American. In addition, foreigners do not realize that there is no such thing as an authentic American. America is settled by so many different people from all over the world. ...read more.

The world needs to realize that as societies coexist and collide, linking is the ultimate means of the spread of global culture. Material goods move, people move and ideas move. Change is not a choice but a reality that we need to embrace. I believe cultures do not become more standardized; instead, both old and new tend to modify each other. Globalization gives us opportunities to learn and grow in a way that we can have a better understanding amongst each others. This is the true driving force to cultural changes. So we can see global culture does not mean how much commercial things we can acquire but the tie of people's heart that connect all the humans, which is also the true meaning of globalization. Resources: Pratheep, P.S. (2010). Globalisation, Identity and Culture: Tribal Issues in India. Retrieved from http://www.lscac.msu.ac.th/book/149.pdf ...read more.