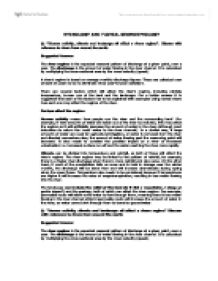 HYDROLOGY AND FLUVIAL GEOMORPHOLOGY Q: "Human activity, climate and landscape all affect a rivers regime". Discuss with reference to rivers from around the world. Suggested Answer The river regime is the expected seasonal pattern of discharge at a given point, over a year. The discharge is the amount of water flowing in the river channel. It is calculated by multiplying the cross-sectional area by the mean velocity (speed). A river's regime is based on average monthly discharge figures. These are collected over at least 20 years to try to eliminate minor year-to-year variations. There are several factors which will affect the river's regime, including rainfall, temperature, human use of the land and the landscape. For a better answer it is suggested that each of the factors has to be explained with examples using named rivers how each one may affect the regime of the river. Factors affect the regime Human activity means 'how people use the river and the surrounding land'. For example, if vast amounts of water are taken out of the river by industry, this may affect the regime as it will artificially decrease the amount of water in the river (although most industries do return the 'used' water to the river channel). In a similar way, if large amounts of water are used for agricultural irrigation, or water is removed from the river and directed somewhere else, the amount of water flowing past the measuring point will decrease. It also needs to consider the possible impact on a river of increased urbanisation i.e. increased surface run-off and the water reaching the river more rapidly. Climate can be divided into temperature and rainfall, as both of these will affect the river's regime. The river regime may be linked to the pattern of rainfall, for example, there is a higher river discharge when there is more rainfall and vice versa. On the other hand, if most of the precipitation falls as snow and is held in storage over the winter months, the discharge will be lower then and will increase dramatically during spring when the snow thaws. ...read more.

These factors will all affect the field capacity of the soil and so the amount of surface water it can absorb. The quantity of water already present in the pore spaces before a rainstorm will directly affect the ability of the soil to absorb more from the surface. This antecedent moisture (water which is already present) will therefore influence overland flow rates. If the soil is already saturated with water, overland flow will be rapid and greater in volume than if there is plenty of capacity available in the soil store. The timing of the last rainfall to take place, its intensity and amount will be important factors in determining the capacity for storing new inputs. The percolation rate will depend on the nature of the soil store and also directly on the permeability of underlying rock which is present. Therefore, when these soil and groundwater stores are full, or saturated, then water is transferred into the river channel, partly by overland flow. Some of the water input into the system is also transferred horizontally along the soil profile by throughflow into river channels. Finally, some water flows slowly at depth underground by groundwater flow (sometimes called baseflow). Smaller soil and groundwater stores will lead to increased overland flow rates overall because the ground will become saturated more quickly. Q: How does the amount and location of water change in a hydrological cycle? Suggested Answer The hydrological, or water cycle is a model used to explain the movement of water on the planet. The hydrological cycle is extremely complicated and the relationships between some parts of it are still poorly understood, although it is becoming clear that there are serious implications to humans' interference with its workings. The hydrological cycle is a closed system, which means that the total amount of water in the global system stays the same, or is conserved, overall. The total amount of water in the Earth's hydrological cycle can only be estimated: the US Geological Survey suggested the total water volume to be around 1,384,000km3. ...read more.

In a highland area, the channel tends to be rough in shape with rocks sticking out of the river bed. The load is angular and often consists of larger boulders and rocks. These all mean there in an increased wetted perimeter. This leads to greater friction. A lowland river, however, will have a wider channel and a much smaller load, meaning a reduction in friction, leading to an increase in the river's efficiency. Q: What are factors can be used to assess the flood risk in the global hydrological cycle? Suggested Answer The following are some of the factors, which you can expand on and give examples of: Rainfall and other precipitation Obviously the more rain the higher the flood risk, but the extent of the risk depends on what happens to the rainfall as below. Rate of runoff This is affected by angle of slope, soil and vegetation cover. Infiltration rate If most of the rainfall infiltrates into soil and permeable rock, this slows runoff into rivers. If infiltration is reduced by covering land with buildings, concrete and tarmac, water is rushed off into drains and reaches rivers quickly, causing flooding. Interception Vegetation, particularly trees, trap some rainfall as leaves get wet . If vegetation is removed, there is less interception, more runoff and more flooding. Evaporation During warmer seasons, evaporation (& transpiration) removes water before it can cause flooding. In cold seasons, with less evaporation (& transpiration), more water reaches rivers. Transpiration Vegetation, particularly trees, take up large amounts of rainfall through roots and give it off as transpiration. If vegetation is removed, there is less transpiration, more runoff and more flooding. Snow melting causes flooding if it happens quickly with a sudden rise in temperature. Silting of river channels makes drainage less efficient and can cause them to flood. Global warming causes a rise in sea level leading to flooding by sea and stopping the drainage of water from rainfall. It can increase rainfall and flooding in some areas of the world. The biggest risk of flooding is caused by combinations of the above factors. ...read more.