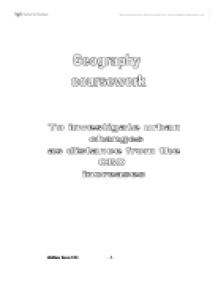 Table of Contents Table of Contents 2 Introduction 3 Introduction to Maidenhead 3 Map of Maidenhead 4 Short history of Maidenhead 4 My Aim, Hypothesis' and how to prove them 4 My Aim 4 My Hypothesis' 4 Theory 5 The concentric Land use models 5 The Methods- Pros and Cons 6 Land Use Surveys 6 Questionnaires 6 Traffic counts 6 Environment Surveys 7 Photographs 7 Field sketches 7 Introduction In this I will be looking at the urban changes as the distance increases from the central business district, or CBD. I will be looking at a range of investigations, these are: * House prices * Traffic density * Pedestrian density * Open space * Housing quality * Environmental quality I will be doing this by doing a field study. In my field study I will go to five different sites around Maidenhead. They have been picked for their location and although don't go in a straight line are at differing distances from the CBD. I did this because in the Hoyt model of a city there is a straight line of space for the CBD, I didn't want to go down this area and only have data for a CBD. Instead I carefully planned where to put them using my knowledge of Maidenhead. Introduction to Maidenhead The town I will be looking at is Maidenhead, a small town with a population of about 70, 000. ...read more.

To prove this * The further away from the CBD you go the more open space you will get. * The further away from the CBD you go the better the housing quality will get. * As you go further away from the CBD the environmental quality will improve. Theory This is the theory being applied to my research. I'll start with the CBD; this is the heart of a settlement. It is where most of the business of the settlement is carried out and the most important part of any settlement. A CBD is likely to have many of the following characteristics: * It has a distinct land use pattern that can be delimited from the rest of the settlement. * It is the geographical centre of the settlement. * It contains the settlement's main public buildings. * It contains the major retail outlets. * Similar activities within it are concentrated in certain areas. * It has the greatest concentration and number of pedestrians and traffic in general. * It is a focal point for transport. * It contains the greatest proportion of the settlement's offices. * It has the tallest buildings in the region to maximize land use. * It has the highest land values of the region. * It attracts people from outside its sphere of influence to work and spend money inside. ...read more.

The bad side of questionnaires is that you have to plan them out very well to incorporate all the possible answers and so your questions have points relative to the main objective. Traffic counts Traffic counts are where you count the amount of traffic going past you in a certain amount of time; I'll use 10 minutes. You tally it and then put it in numbers afterwards. This can be inaccurate though, especially on busy roads and motorways. It is quick to do which is a plus, and using more people to count the different types of vehicles will make it more accurate. Environment Surveys These are like land use surveys but show environmental aspects, like pollution and forested areas. They can be useful to see where people live and if pollution will bring down a house value. These can be especially useful to people looking to buy a house or land. Photographs Photographs are very useful as second hand information because you can see something exactly as the other people would of. They are also easy to take but if you don't have a digital camera can be hard to view. Field sketches These are good to remind yourself of what something looks like more then show someone, as most times they won't look that much like what they are of. They are quick to make and easy to carry around with you but are hard to make in rain, wind or other bad weather conditions. ?? ?? ?? ?? Matthew Reeve 10D - 1 - ...read more.