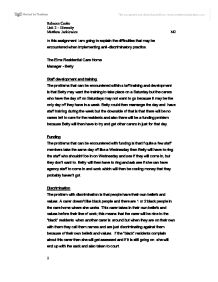 In this assignment I am going to explain the difficulties that may be encountered when implementing anti-discriminatory practice.

The problems that can be encountered within staff training and development is that Betty may want the training to take place on a Saturday but the carers who have the day off on Saturdays may not want to go because it may be the only day off they have in a week. Betty could then rearrange the day and have staff training during the week but the downside of that is that there will be no carers left to care for the residents and also there will be a funding problem because Betty will then have to try and get other carers in just for that day.

The problems that can be encountered with funding is that if quite a few staff members take the same day off like a Wednesday then Betty will have to ring the staff who shouldn’t be in on Wednesday and see if they will come in, but they don’t want to. Betty will then have to ring and ask see if she can have agency staff to come in and work which will then be costing money that they probably haven’t got.

There are problems with managers like funding because some carers may want a pay rise and if there isn’t enough money then obviously the carers cant have their pay rise and they may quit their job as a result of this. Another problem for a manager is that the care home could be an old building. Old buildings are more likely to have damp and to start falling down. This could link into the funding because if there wasn’t enough funding then the care home would have to get closed down because they wouldn’t be able to re-damp proof the walls/ceilings and also they wouldn’t be able to afford building works.

There are a few problems for cooks because if they haven’t got enough staff working in the kitchens then everyone would have to be fed at different times which could be a problem with service users if they had a set feeding time. Storage is a problem because if it was a small kitchen then the cook wouldn’t have enough room to store appliances and food. Under trained staff is another problem because if staff wasn’t trained properly then germs could be passed on and also food may not be cooked properly.

A big problem for cleaners is that they could be denied access to a room by a service user. The reason this is a problem is that the cleaner may not get paid if all rooms are not cleaned properly although it wouldn’t be the cleaners fault. Cleaners can also have problems with respect because some carers think they are better than the cleaners because they don’t have to do the dirty jobs other than changing some residents.

Carers get a lot of problems because they could be discriminated against especially if they were male. The reason for this is that there are more female residents in a care home than there are males and some women don’t like to be washed by a bloke even though that is what they were employed for.