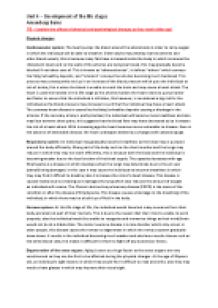 ﻿Unit 4 ? Development of the life stages Amandeep Bains `P5 ? (explain the effects of physical and psychological changes as they reach older age) Physical changes Cardiovascular system: The heart pumps the blood around the whole body in order to carry oxygen in which the individual will be able to breather. Older adults may develop narrow arteries and other blood vessels; this is because many fats have increased inside the body in which increases the cholesterol levels and so the walls of the arteries are being narrowed, this may gradually become blocked if not taken care of. This is known as ?atherosclerosis?, it defines ?athero? which conveys the fatty/unhealthy deposits, and ?sclerosis? conveys the arteries becoming much hardened. This process may consequently end up in an increase of the blood pressure which puts the individual at risk of stroke; this is when the blood is unable to reach the brain and may cause a heart attack. The heart is used the hardest in this life stage as the arteries harden the heart needs to pump harder and faster to ensure that the individual is still alive, this however, is considered a big risk for the individual as the blood pressure may increase to such that the individual may have a heart attack. The coronary heart disease is caused by the fatty/unhealthy deposits causing a blockage in the arteries. If the coronary artery is partly blocked, the individual will become more breathless and also may face extreme chest pains, this suggests that the blood flow may have decreased ad so increases the risk of a heart attack. With increasing age the heart becomes more vulnerable to disease. Even in the absence of detectable disease, the heart undergoes deleterious changes with advancing age. Respiratory system: An individual may gradually become breathless as the blood may e pumped around the body efficiently. Many part of the body such as the chest muscles and the lungs may reduce in which they may not work efficiently, this is because both the body and the individual is becoming weaker due to the less function of the blood supply. ...read more.

Financial concerns: Many people who are aged of 65years old and above own their own home and those who are mainly over 65years have higher levels of savings as they mostly have saved from their previous jobs after retirement. Most of the older people live in the higher standard as they are able to survive on her own expenses; only about one of five adults may live in poverty, this is seen as a problem. Older people who do not receive any private pension funds may have difficulty with their expenses and they will have a budget. This will decrease the individual?s intellectual needs and also it may concern them about paying for heating, shopping and coping financially. Increased leisure time: Increased leisure time is the amount of free time an individual may get; it enables older people to engage in different activities such as; problem solving, walking, table tennis and also activity holidays. Older people can also choose to complete different activities; may these be physical, intellectual, social and mental activities. As shown in the statistics, the National Statistics Online (2006) reported that 51% of older people between the ages of 60years to 69 years old had participated in some form of learning. Culture, Religion and beliefs: The country becoming multicultural in which every culture is treated the same; none of the cultures are treated with low respect. Also, every culture has their own beliefs and traditions in which they follow individually the individuals? needs to consider these factors before doing an activity as these make an impact of their health and well-being. This shows that every individual will be treated the same in which they will not feel discriminated in any way. This influences the way we think, the food we eat, the people we interact with and the way we behave. Culture shows your religious beliefs as well as your parental belief; it shows the right path to follow the truth. ...read more.

Due to this it increases the risk of an individual having a heart disease. If the individual however, has a pension fund then it is more likely that they would fall ill as they would not be able to satisfy themselves. The amount of pension in which the individual receives will affect their self-esteem as their self-confidence will also decrease; this shows the standard of living. Increased leisure time: Older people can also choose to complete different activities; may these be physical, intellectual, social and mental activities. By doing this it increases both their self-confidence and their self-esteem as they know that they are now capable of doing different activities and also it is seen as good for their health. Khan has more free time in which he may complete a variety of activities; these are seen as improving his health as well as his stability. This increase both Khan?s self-esteem and his self-confidence as e is proud of himself that he is using his time wisely, also this may prevent Khan from getting a disease or illness. Culture, Religion and beliefs: Also, every culture has their own beliefs and traditions in which they follow individually the individuals? needs to consider these factors before doing an activity as these make an impact of their health and well-being. This shows that every individual will be treated the same in which they will not feel discriminated in any way. Khan was always taught to respect all religions in which he acknowledged that everyone is different and many people have different beliefs. The beliefs in which he was taught has been valued a lot, as although he got married to a Hindu girl he respected both religions as he didn?t force his wife to change religion. Also, the holy book, the Qur?an and the Hindu holy statues are also kept together to show that religion does not make any difference to him. This increases Khan?s self-esteem and self-confidence as he is encouraged to do the right things, and also it shows that he is not discriminating another?s beliefs whereas other many do so. ...read more.