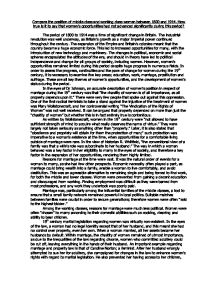 Compare the position of middle class and working class women between 1800 and 1914. How true is it to say that women's opportunities had not advanced significantly during this period?

Compare the position of middle class and working class women between 1800 and 1914. How true is it to say that women's opportunities had not advanced significantly during this period? The period of 1800 to 1914 was a time of significant change in Britain. The industrial revolution was well underway, as Britain's growth as a major Imperial power continued throughout the century. The expansion of the Empire and Britain's colonies meant that the country became a huge economic force. This led to increased opportunities for many, with the introduction of new technology and machinery. The changes in political, economic and social spheres encapsulated the attitudes of the era, and should in theory have led to political independence and change for all groups of society, including women. However, women's opportunities remained limited during this period despite huge progress in numerous fields. In order to assess the progress, continuities and the pace of change for women during the 19th century, it is necessary to examine five key areas; education, work, marriage, prostitution and suffrage. These are all key themes of women's opportunities, and the development of women's status during the period. In the eyes of Dr Johnson, an accurate description of women's position in respect of marriage during the 19th century was that "the chastity of women is of all importance, as all property depends upon it." There were very few people that spoke out against this oppression. One of the first radical feminists to take a stand against the injustice of the treatment of women was Mary Wollstonecraft, and her controversial writing "The Vindication of the Rights of Women" was not well received. It can be argued that property depended on more than just the "chastity of women" but whether this is in fact entirely true is contentious. As written by Wollstonecraft, women in the 19th century were "not allowed to have sufficient strength of mind to acquire what really deserves the name of virtue." ...read more.

This prevented women from working in pit-brows, and was introduced because this type of work was widely seen as unsuitable for women, depriving them of their femininity and being bad for their health. The Select Committee of 1911, according to historian P. Bartley, "just like the supporters of the 1842 Coal Mines Act, were no less concerned with women's roles as wives and mothers than they were with women's health," showing continuity in the period. However, in the opinion of the same historian, "one of the most significant changes between 1842 and 1911 was perhaps the response of women to protective legislation." Owing to the loss of approximately 6000 female jobs in 1911, working class women demanded the right to work, as opposed to the right to their so-called protection. The National Union of Women's Suffrage Societies and the Women's Freedom League denounced the amendment, labelling it as a male conspiracy to stop women's right to work. The Women's Social and Political Union, and its key figures such as Annie Kenney, were of great support to the female pit-brow workers. Due to this help, women won the right to remain on the pit-brows. This shows a change in women's political influence in Britain during the period, although women were not given the vote until 1928. For the middle classes, limited rights for women made it difficult for them to operate in business on their own, and many working women may have preferred to keep their income a secret from their husband. However schemes of charity work and philanthropy were popular among the married women of the middle classes. For example, the Ladies' Associations for the Care of Friendless Girls, led by Ellice Hopkins were set up in order to provide help to working class girls in Britain. She has been unanimously seen by historians as crucial in the development of preventative work. For single women from middle class families, some employment would have been essential to support oneself. ...read more.

It was also thought that increased freedom would encourage women to devote less time to their families. Within the domain of women's suffrage, there were numerous societies who campaigned for the extension of women's rights. The original 1896 National Union of Women's Suffrage Societies, or Suffragists, headed by Millicent Fawcett, argued that women who had money employed men who were able to vote, however were unable to do so themselves; this was an unjust situation. They made insignificant progress with regards to the plight of women, rendering their opportunities limited in this field until the 20th Century. In 1903, the instigation of the Women's Social and Political Union, or Suffragettes, led by Emmeline and Christabel Pankhurst, saw the birth of a much more hard-line attitude regarding campaigns. Their actions included the burning of churches, disruption of parliament and hunger strikes. Historian A. Marwick describes them as "militant," and believes they "destroyed the prospects of compromise by exacerbating the hostility." In the quest for equality, they had hindered their own efforts and prolonged liberation for women. The irony of their protest was proven in the Cat and Mouse Act of 1913. Women whose hunger strike made them too ill would be let out of prison to recover, and then be re-arrested when well. This followed a minority defeat in parliament in 1912, where the quest for the franchise was lost by 14 votes. World War one was a significant milestone in terms of women's opportunities as the economic involvement of women increased by about a third. As men went to war, employment opportunities for the female population expanded; doubled with new war industries such as munitions and the auxiliary services, these shifted women's opportunities in terms of work away from the traditional domestic service. The war helped to ease the transition from the double standards for women and men, and was a seminal point in the fight for the vote, which was finally awarded to the over 30's in 1928. ...read more.