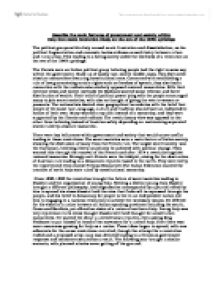 Describe the main features of government and society within Italy that made revolution likely on the eve of the 1848 uprisings The political groups within Italy caused much frustration and dissatisfaction, as the political fragmentation and economic backwardness caused rivalry between urban and rural areas. This leading to a failing society aided the likeliness of a revolution on the eve of the 1848 uprisings. The liberals were an Italian political group believing people had the right to some say within the government. Made up of mostly non-violent middle-class, they distrusted absolute monarchies favouring constitutional ones. Concerned with establishing a rule of law guaranteeing certain rights such as freedom of speech, they also had a connection with the radicals who similarly opposed restored monarchies. ...read more.

There were key Influences within government and society that would cause conflict leading to these revolutions. The secret societies were a main feature of Italian society showing the disillusion of many from the French rule. The largest secret society was the Carbonari, believing liberty could only be achieved with political change. They wanted this through the removal of the French and after 1814 a revolution against restored monarchs. Strongly anti-French were the Adelphi, aiming for the destruction of Austrian rule leading to a democratic republic based in the north. They were led by the experienced revolutionist Frilippo Bvanariotti.The Italian federation wanted the creation of north Italy state ruled by constitutional monarchy. ...read more.

Here there was more awareness growing for Italy as a nation. These ideas began to spread, with new adherents for the cause revolutions recruited, though the attempt for a revolution ended and a proposed army coup was detected leading to a ferocious government response and members executed as a result. The following year brought a similar scenario, with planned attacks never getting off the ground. Vimenzo Gioberti wrote "Primato morale," and, "Delgi Italiani," in 1843, agreeing with Mazzini that Italy should be rid of foreign influence. This belief was that Italian states should be together in federation and the leadership of the Pope believing papacy in Rome gave Italian morale the upper hand over Europe.The way forward without revolution was New-Guelphi,appealing to those who disliked the french style unitary state suggested by Mazzini.Giobertis book however failed to mention Austrian control ...read more.