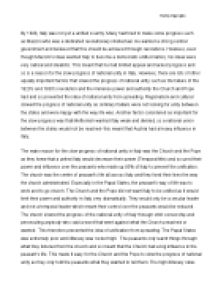 How far do you agree that the limited appeal of Mazzini's ideas was the main reason for the slow progress of national unity in Italy in the years 1815-1848?

﻿Bukky Ogungbe By 1848, Italy was not yet a unified country. Many had tried to make some progress such as Mazzini who was a dedicated revolutionary intellectual. He wanted a strong central government and believed that this should be achieved through revolutions. However, even though Mazzini?s ideas wanted Italy to become a democratic unified nation, his ideas were very radical and idealistic. This meant that he had limited appeal and lacked progress and so is a reason for the slow progress of national unity in Italy. However, there are lots of other equally important factors that slowed the progress of national unity such as the failure of the 1820?s and 1830?s revolution and the immense power and authority the Church and Pope had and so prevented the idea of national unity from spreading. Regionalism and cultural slowed the progress of national unity as ordinary Italians were not looking for unity between the states and were happy with the way life was. Another factor considered as important for the slow progress was that Metternich wanted Italy weak and divided, so a national union between the states would not be reached- this meant that Austria had a heavy influence in Italy. ...read more.

Therefore, Mazzini?s ideas appealed to limited social classes and so alienated important supporters which is one of the reasons for the slow progress in uniting Italy as he failed to acknowledge the significance of having a revolution that included all the different types of people in Italy- his ideas were not popular among the vast majority of Italians. Another factor that needs to be examined when looking at the reasons for the slow progress in national unity in Italy was lack of mass support in the 1820?21 and 1830 revolutions as it only consisted of small uprising with limited support which shows that national unity in Italy was not important for many Italians. The 1820?21 and 1830 revolutions were actually small uprisings by a tiny number of people who wanted change in their state- whether this was democracy or a constitution. Therefore, the fact that there was a lack of support in these ?revolutions? shows that Italians were not actually interesting in having revolutions in their own states let alone fighting for national unity in Italy and so this is why there was slow progress in Italian unification. ...read more.

Austria had control over the ruling monarchs in Italy but national unity in Italy will put an end to this. Austria?s force therefore slowed the progress of national unity in Italy by eradicating revolutionaries and working with the restored monarchs to stop the idea of unification spreading. Overall, to some degree, the limited appeal of Mazzini?s idea was a main reason for the slow progress for the national unity in Italy as his ideas were too radical which meant it only appealed to limited social class and the revolutionary nature of Mazzini?s nationalism limited his appeal. However, other aspects such as the role of the Church and the Pope were a bigger influence to the slow progress of Italian unification as the Church highly influenced ordinary people and so be preventing the idea of Italian unification from reaching the peasants reduced support to the unification thus slowing down its progress. The church had mass support which is what Mazzini lacked. The lack of nationalism was a big reason for the slow progress because by 1848, Italians were still thinking regionally and unification was not on the agenda. People would not have paid much attention to Mazzini?s ideas for national unity. ...read more.