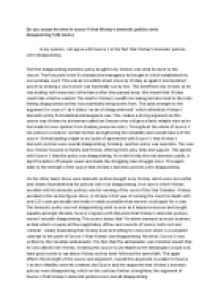 Do you accept the view of Ian Dawson that Wolsey's domestic policies were disappointing?

﻿Do you accept the view in source V that Wolsey's domestic policies were disappointing? (40 marks) In my opinion, I do agree with Source V in the fact that Wolsey's domestic policies were disappointing. The first disappointing domestic policy bought in by Wolsey was what he done to the church. The first point is the Ecclesiastical extravagance he bought in which established his own probate court. This was an incredibly smart move by Wolsey as again it monopolized power by making a court which was essentially run by him. This benefited only Wolsey as he was dealing with everyone's inheritance after they passed away, this meant that Wolsey could take what he wanted. This lead to Wolsey's wealth increasing and also lead to the Laity feeling disappointed as they was essentially being stolen from. This adds strength to the argument for source V as it states "an air of disappointment" which ultimately Wolsey's domestic policy Ecclesiastical extravagance was. This creates a strong argument as this source was Written by a historian called Ian Dawson who will give a fairly reliable view as he has made his own opinion from studying everyone else's. Throughout the whole of source V Ian writes in a modern context further strengthening the reliability and overall nature of the source. Overall adding weight to my point of agreement with Source V that Wolsey's domestic policies were overall disappointing. ...read more.

This was a non-parliamentary tax bought in by Wolsey to increase the king?s crowns. This was an extremely disappointing policy in the eyes of the laity. On top of all the other taxes, many people struggled to pay this. Even the King eventually ruled this out as unjust therefore banning it in May 1525. Conclusively, making this a disappointing policy bought in by Wolsey. This point is backed up by Source T as the Amicable grant could of ?aroused against himself hatred of the whole country" as Source T states. Source T however, is also a weak source to back up this argument as it's unreliable, this is because it was written by Polydore Vergil who was imprisoned by Wolsey, which caused bad tension between them; ultimately meaning that Vergil would over exaggerate and only talk about the bad stuff that Wolsey done, further weakening this source. Comparing this to the Source V it disagrees and they do not support each other. Due to the reliability and strength of this source it further strengthens source V and the argument that Wolsey's domestic policies were actually disappointing. Conversely, one good policy bought in by Wolsey under finance was the taxation of other countries. For example, England started to use taxation laws and enforce them on France to prevent an invasion. ...read more.

This dramatically strengthens Source V and the argument within the source as it's extremely reliable. Followed up by my knowledge of Wolsey's policies it tends to agree with the source. Firstly the main disappointing policies which were the church forms of nepotism and ecclesiastical extravagance. These were extremely disappointing as it didn't help anyone and Wolsey essentially stole from the laity. This is followed up by the amicable grant which isn't important to the other two as people rioted and got the law changed by Henry, however relating it to the question it was an extremely disappointing policy. Then followed by the least important but still disappointing fact of his controlling of the nobility, again he made himself more powerful and meant he was fairly untouchable throughout England. On the other hand Wolsey did have some policies which were actually good, like his reformation and expansion of the court of the Star Chamber which was extremely beneficial and fair to the laity. Similarly, the taxation of France as it relieved the taxation of the laity again making it beneficial for them. Overall, the disappointing policies outweighs the good, the laity and people affected by these policies were extremely disappointed with Wolsey. To strengthen this argument, Source V is reliable and outweighs the other two sources on strength and reliability wise to this argument due to the other two being unfairly bias therefore unreliable. ...read more.