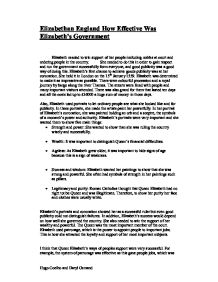 Elizabethan England How Effective Was Elizabeth's Government Elizabeth needed to win support of her people including nobles at court and ordering people in the country. She needed to do this in order to gain respect and run the government successfully form everyone, and good publicity was a good way of doing this. Elizabeth's first chance to achieve goods publicity was at her coronation. She held it in London on the 15th January 1559. Elizabeth was determined to make it as impressive as possible. There were colourful procession and a royal journey by barge along the river Thames. The streets were lined with people and many important visitors attended. There was also grand for them that lasted ten days and all the costs led up to �16000 a huge sum of money in those days. Also, Elizabeth used portraits to let ordinary people see what she looked like and for publicity. In these portraits, she made the artists paint her powerfully. In her portrait of Elizabeth's coronation, she was painted holding an orb and a sceptre, the symbols of a monarch's power and authority. Elizabeth's portraits were very important and she wanted them to show five main things: * Strength and power: She wanted to show than she was ruling the country wisely and successfully. * Wealth: It was important to distinguish Queen's financial difficulties. * Ageless: As Elizabeth grew older, it was important to hide signs of age because this is a sign of weakness. ...read more.

He was put in charge of Elizabeth's secret service - controlled a number of spies all over Europe. Also often disagreed with Cecil, and he often made Elizabeth angry but she knew he was completely loyal. He found evidence in 1586 Mary Queen of Scots was involved in a plot to kill the Queen. Robert Devereux: commanded attacks on Spain and Ireland. Often argued with Elizabeth. In 1601, he led a rebellion and was executed for treason. The Privy Council met nearly every day and although Elizabeth didn't go to all meetings. She was determined to show that she was a cautious ruler. She didn't like making big changes or being rushed into making decisions. This often frustrated her councillors but they were completely loyal to her apart for two exceptions: Duke of Norfolk Earl of Essex I think that this aspect of the government was very effective and successful as they helped Elizabeth and they were nearly all completely loyal to her apart from two people (mentioned above). I think that this was successful because she let all the members know who was boss and was not rushed into anything. She also chose her members very wisely and each member had their own speciality. Parliament in the sixteenth century was much less powerful than it was today. It could only meet when the monarch called it. Although Elizabeth didn't have to call the call parliament at all and she could close it whenever she liked. ...read more.

Elizabeth elected about forty of them in every county. They were usually landowners who knew there area well. This work was voluntary, however many landowners still wanted to become a JP as it meant that they were the most important person in the area. The Queen expected her Justice of the peace to carry out a range of duties. JP were given more and more work to do during Elizabeth's reign. They were often given instruction form the Privy Council to carry out new laws form parliament to enforce. I think that this method was an effective way of keeping the country in order. However, it became less efficient as Elizabeth's reign progressed. In addition, Elizabeth had a big enough reputation to persuade people to become JP's voluntarily. Overall, I think that Elizabeth's government was very effective. I think she controlled the country well and thorough out her reign there were no wars or rebellions in England and she had a good relationship with other countries. In addition, Elizabeth knew how to get her point across and she made herself the most important person in court and made sure that she was in control and never let anyone take control away for her. Maybe that was the reason that she never married because she was afraid that her husband would try to do so. Also Elizabeth publicised herself well and let people know what qualities she had and let people know that she was suitable for queen as was the right person to run the country. Hugo Coelho and Daryl Osmand ...read more.