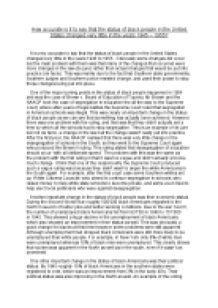 One other important change in the status of black Americans was their political status. By 1945 roughly 15% of black Americans in the southern states were registered to vote, which was an improvement from 2% in the early 40?s. Their political status was also improving in the North as well. An example of the voting power of black Americans at this time was the election of Adam Clayton Powell to congress. He was the only black American to be elected to congress between 1945 and 1955. Another example of their increasing political power was that in 16 northern states if the black community had voted as one block they would have determined the outcome of that election. This shows a big step in the status of black Americans as it now shows that even more of them are gaining the right to vote not only in the north but in the south as well. One other example of their growing political power was shown through President Truman. By this I mean that President Truman recognised how important the black vote was, and tried to appeal to the black American community to get their vote. For example he desegregated the inauguration, he desegregated the army, he tried to desegregate an airport in Washington but only manages to desegregate the canteen, and he passes the Fair Employment Practices Commission which made sure that government contracts didn?t go to r****t employers. ...read more.

This was because integration between blacks and whites was seen as wrong and they should be kept ?separate but equal?. In conclusion, we can see that although it appeared there were quite a few changes in the status of black Americans, none of them were actually put into practice which shows that their status changed very little. I think that the most significant case was probably the Brown case because it did actually cause some progress to be made and some schools were actually desegregated. However, the majority stayed segregated which meant that the problem wasn?t solved and the progress that had been made was not a useful as it could have been. Obviously there were other small changes such as economic status and their political status. The problem with the change in their economic status was that it only really occurred in the North and not the South, and even in the North black men were more likely to be unemployed than white men. The problem with the change in their political status was that the progress seemed to be happening in the north rather than both the north and the south and obviously this was a problem as the change was only in one area. Overall I think it is very accurate to say that the status of black people in the United States changed very little in the years 1945 ? 1955. ...read more.