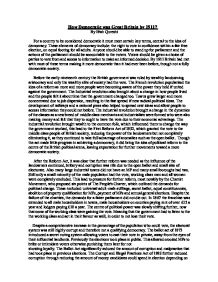 How democratic was Britain by 1911?

How Democratic was Great Britain by 1911?

For a country to be considered democratic it must meet certain key terms, central to the idea of democracy. These elements of democracy include: the right to vote in confidence within a fair free election, on equal footing for all adults. Anyone should be able to stand up for parliament and the actions of the parliament should be accountable to the voters. Voters should be given a choice of parties to vote from and access to information to make an informed decision. By 1911 Britain had met with most of these terms making it more democratic than it had ever been before, though not a fully democratic society.

Before the early nineteenth century the British government was ruled by wealthy landowning aristocracy and only the wealthy elite of society had the vote. The French revolution popularized the idea of a reform as more and more people were becoming aware of the power they held if united against the government. The Industrial revolution also brought about a change in how people lived and the people felt it about time that the government changed too. Towns grew larger and more concentrated due to job dispersion, resulting in the fast spread if new radical political ideas. The development of railways and a national press also helped to spread new ideas and allow people to access information they could not before. The industrial revolution brought a change in the dynamics of the classes as a new breed of  middle class merchants and industrialists were formed who were also making money and felt that they to ought to have the vote due to their economic advantage. The industrial revolution brought wealth to the common folk, which influenced them to change the way the government worked, this lead to the First Reform Act of 1832, which granted the vote to the middle class people of British society, reducing the power of the landowners but not completely eliminating it, as they continued to take full advantage of anomalies such as the open ballot . Though the act made little progress in achieving a democracy, it did bring the idea of political reform to the centre of the British political arena, leaving expectation for further movements toward a more democratic society.

After the Reform Act, it was clear that further reform was needed as the influence of the landowners continued, bribery and corruption was rife due to the open ballot and small size of electorate. Also many large industrial towns did not have an MP and many small boroughs had two. Still only a small minority of the male population had the vote, working class men and all women were completely excluded. This lead to pressure for further reform, most notably by the Chartist Movement, who proposed six points of The People's Charter, which outlined the demands for political change. These included: universal adult-male suffrage, secret ballot, equal constituencies, abolition of property qualification for MPs, payment of MPs and annual general elections. Despite the failure of the chartists, the demands for a fairer parliament did not die out. In 1867 the franchise was extended to all male householders in towns, male householders on counties paying rent of over £12 a year and lodgers paying £10 a year. The centre of political power was slowly shifting further, now that some of the working class were gaining the vote. Meaning that the government had to listen to the the working class and act in their favour as well, in order to not lose their vote.

Despite a comprehensive increase in the percentage of the population who could vote, the electoral system was still highly corrupt and therefore not a qualifying democracy. The ballot act of 1872 introduced a secret voting system allowing voters to cast their vote in private, away from the eyes of their influential landlords. Previously the elections took place in public. This allowed crooked MPs to bribe or intimidate voters otherwise punishing them later for not

showing loyalty. The Ballot Act significantly reduced the amount of corruption and malpractice that had took place in previous elections. The Corrupt and Illegal Practices Act of 1883 further reduced corruption through reducing the amount of money candidates could spend in election depending on the size of constituency and reasons for expenditure. Candidates were now to be held accountable for all their spending and involvement in corruption was punishable by law. The act also outlined what practices were out with the law for candidates, among imprisonment and fines candidates were disqualified for seven years.

The loss of popularity of the Liberals lead Gladstone to consider extending the franchise further. In 1884 another reform act was past allowing all householders and lodgers paying £10 per year in rent, whether it be in borough or counties, to vote. This was significant as the act resulted in a near doubling of the electorate, bringing the amount of voters up to 5 million, and allowing unskilled workers such as farmers and miners the vote. The following year the Redistribution of Seats Act helped to further disperse the amount of MPs in Britain, and established a fairer redistribution of candidates for constituencies.

In 1911, an act was past that granted that all MPs be paid a wage, this meant that for the first time ever, anybody, regardless of there background could stand up for MP, making society further more democratic than before. In the same year the Parliament Act was passed, limiting the powers of the House of Lords by denying them the right to veto any Bills regarding taxation or Government expenditure. Also giving parliament a five year life, allowing citizens the right to change the people in authority.

Initially the political system was severely flawed, undermining those considered not wealthy enough and denying a large majority the right to vote. The 1832 reform act propelled the issue of democracy to the centre of politics, allowing for many for laws to be passed that brought about a fairer system, where as previously the parliament was not representative on a social, economic and geographic level. The journey to a fairer political system started with the First Reform Act of 1832, which extended the franchise to the middle class and redistributed parliamentary seats. This is followed by the second reform act which has a similar more effective result. In 1867 the Ballot Act, saw the introduction of a secret ballot brought down corruption and an end to intimidation. The Corrupt and Illegal Practices Act of 1883 reduced the amount of corruption through setting strict and effective limits on the expenditure of candidates. The franchise was further extended to give two out of three men the vote in 1884 through the Third Reform Act. The next year The Redistribution of The Seats Acts established many single member constituencies. The Parliament Act of 1911 inhibited the powers of the House of Lords and limits the life a parliament to five years. 1911 was also the year that saw the introduction of the payment to MP's, which meant that anyone could stand up for MP. The political reforms cleaned up the election process allowing for privacy of votes and a fairer redistribution of parliamentary seats. More importantly the extension of the franchise to the middle class and working class men to an extent, meant Britain was edging closer to a democratic society though not yet a full democracy as all women and men such as paupers, servants and soldiers where excluded.