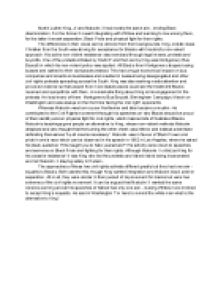 How did the aims and methods of Martin Luther King and Malcolm X differ?

﻿Martin Luther King, Jr and Malcolm X had mostly the same aim - ending Black discrimination. For the former it meant integrating with Whites and learning to live among them, for the latter it meant separation, Black Pride and physical fight for their rights. The differences in their views can be derived from their backgrounds. King- middle class Christian from the South was striving for acceptance for Blacks with his strictly non-violent approach. His active non-violent resistance was exercised through legal means, protests and boycotts. One of the protests initiated by NAACP and then led by King was Montgomery Bus Boycott in which his non-violent policy was applied. ...read more.

A remarkable thing about King is his engagement in the protests. He lead many of them: Montgomery Bus Boycott, Birmingham Campaign, March on Washington and was always on the front line facing the civil right? opponents. Whereas Malcolm was born a poor Northerner and later became a muslim. He contributed to the Civil Rights movement through his speeches on why Blacks should be proud of their identity and on physical fight for civil rights, which inspired lots of frustrated Blacks. Malcolm?s teachings gave people an alternative to King, whose non-violent methods Malcolm despised and who thought that the turning the other cheek was inferior and instead advertised defending themselves ?by all means necessary?. ...read more.

The approaches of these two civil rights activists differed greatly but they had one aim - equality to Blacks. Both wanted this, though King wanted integration and Malcolm black pride in separation. All in all, they were similar in their pursuit of improvement for blacks but were two extremes of the civil rights movement. It can be argued that Malcolm X wanted the same America as King and all his speeches of hatred had only one aim - making Whites more inclined to accept King?s requests. He said in Washington ?I?m here to remind the white man what is the alternative to King?. ...read more.