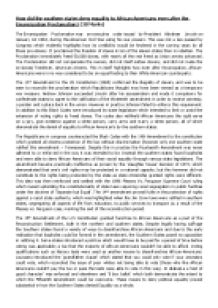 ﻿How did the southern states deny equality to African Americans even after the Emancipation Proclamation? (30 Marks) The Emancipation Proclamation was an executive order issued by President Abraham Lincoln on January 1st 1863, during the American Civil War using his war powers. This was not a law passed by Congress which evidently highlights how its credibility would be hindered in the coming years by all those pro-slavery. It proclaimed the freedom of slaves in ten of the eleven states then in rebellion. The Proclamation immediately freed 50,000 slaves, with nearly all the rest freed as Union armies advanced. The Proclamation did not compensate the owners, did not itself outlaw slavery, and did not make the ex-slaves/ freedmen, American citizens. This in itself highlights how even after Emancipation, African-Americans were in no way considered to be on equal-footing to their White American counterparts. The 13th Amendment to the US Constitution (1865) confirmed the illegality of slavery and was to be seen to reconcile the proclamation which Republicans thought may have been viewed as a temporary war measure. Andrew Johnson succeeded Lincoln after his assassination and made it compulsory for confederate states to agree to the ratification of the thirteenth amendment in order to receive amnesty, a pardon and a place back in the union. However in practice Johnson failed to enforce this requirement. ...read more.

Voting qualifications such as literacy tests were used as another means to disenfranchise African-Americans. Louisiana introduced the ?grandfather clause? which stated that you could only vote if your ancestors could vote, which reconciled the issue of poor whites not being able to vote (those who like African Americans couldn?t pay the tax or pass the tests were able to vote in this way). In Alabama a ?test of good character? was enforced and elsewhere and ?8 box ballot? which both demonstrate the extent to which the Fifteenth Amendment could be overcome. These means to deny political equality proved substantial in how the Southern States denied Equality as a whole. Economic equality was also denied to African Americans. Lincoln intended to provide African Americans with the basic necessities he believed would enable them to progress economically, a concept he named ?40 Acres and a Mule? concept. This eventually took the shape of The Homestead (1862) and Southern Homestead Act (1866). In practise however this didn?t work and was substituted with ?Share-cropping?. Share-cropping was the renting of land from White landlords and entering into agreements with local businessmen (who would provide African-Americans with tools and seeds as a loan). In return, African Americans were expected to give between one half to two thirds of their harvest up as payment. Often African Americans couldn?t afford to repay the landlords or merchants and thus remained trapped on this land by debt ? which can be seen as another unofficial form of slavery. ...read more.

In Summary, though the Emancipation Proclamation can be seen as a turning point in the status of African Americans, it did not prevent the Southern States from finding a variety of ways to deny them social, political and economic equality. Yet violence against AAs was arguably the aspect that hindered their progress in reaching equality the most. This is because it prevented African Americans from actually attempting to gain their equality in other ways. The maxim ?A little lynching goes a long way? highlights the ?positive outcomes? of lynching a few African Americans, which was seen by the Southern States as keeping all of them ?in their place?. Due to the fact that AAs were too scared and had such low self esteem, it took a long time before they could actually channel the anger they felt at the crimes carried out against their people, into attempting to achieve equality. The 1955 lynching of Emmitt Till proved vital in actual provoking enough outrage and passion that could be positively distributed into the civil rights movement. Till?s murders were not convicted, despite confessing to the crime and selling their story for $4000 after the trial had ended. This in itself just cements the idea that violence against African-Americans, even in the latest stages of state segregation, proved to be arguably the greatest of the injustices against them. Indeed, the violence denied African-Americans of their most important right: the right to life, liberty and security of person (Article 3, UNDHR). Temi Mwale 12N ...read more.